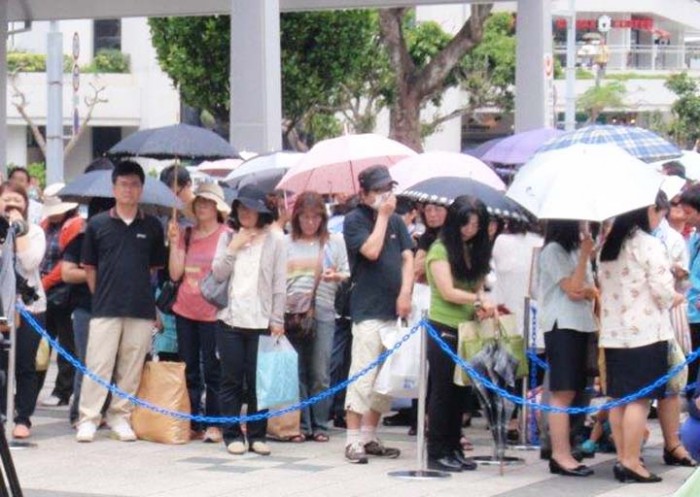 People line up to exchange their old Kariyushi shirts for a new one at last year’s event.

Monday’s Kariyushi Day, and promoters of Kariyushi wear are organizing a unique event at the open space ‘Kenmin Hiroba’ in front of the Okinawa Prefectural Government Building in Naha.

“Kariyushi” is an Okinawan word meaning “harmony” or “happiness.” It has also come to mean a style of shirts, worn both men and women that were originally created on Okinawa to be worn in both casual and formal occasions during the long, hot and humid summer months of the islands.

Okinawa Prefecture has actively promoted wearing Kariyushi shirts for use in offices and business in place of the formerly used ties and white dress shirts. They were first used only in the summertime, but these days many people use them almost year round. They first became common as uniforms in hotels, banks and shops.

In 2005, the nation-wide Cool Biz campaign promoted by the national Government, prompted members of Okinawa Prefectural Government to start using them, and since them it has become a rare sight to see the Okinawa Governor, for example, to wear suit and tie on most occasions. In June, Japan nationwide changes to summer clothing from winter wear. In Okinawa, it’s been decided that June 1st is the Day of Kariyushi Wear.

The event will be held Monday from 12:20 p.m. to 1:30 p.m. Admission to the event is free. A special promotion at the event is individuals bringing three of their used Kariyushi shirts that were made in Okinawa and handing them over to the organizers.  In exchange, the person will receive one free new Kariyushi shirt. A word of warning, though. The shirts must be ‘Made in Okinawa.’

Numbered tickets for changing the shirts will be handed out starting at 11:30 a.m.. The venue is the open space ‘Kenmin Hiroba’ in front of the Okinawa Prefectural Government Building in Izumizaki, Naha City.  Although the closing time is scheduled for 1:30 p.m., the event will finish as soon as the stock of new shirts runs out. The stock is a limited by the number of men’s and ladies’ shirts, as well as size. Participants cannot choose the pattern of their new shirt, and they cannot be exchanged afterwards. The number of new Kariyushi shirts to be exchanged at the event is limited to 500.