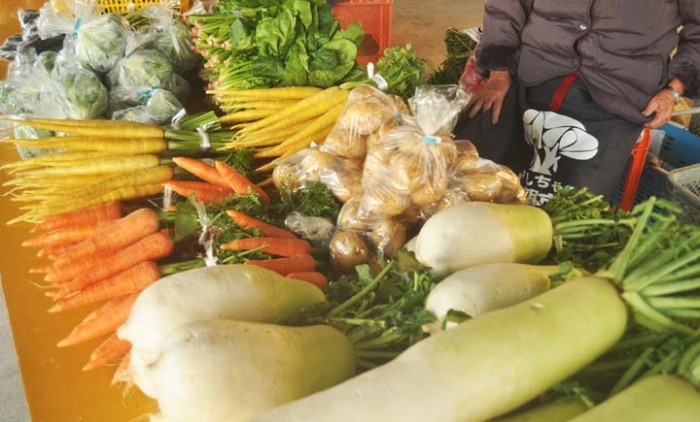 Yaese Town has made the “colorful” vegetables its farmers grow a trademark.

Karabezi is the Japanese name for colorful vegetables, and the word is on the lips of virtually everyone in Yaese Town, a producer of various kinds of agricultural products like vegetables, flowers and fruits.

Yaese Town is a prefectural government-certified major producer of bell peppers.  More than 60 % of the bell peppers grown in Okinawa come from Yaese.  Other than bell peppers, okra, lettuce, purple sweet potato (beni-imo) and mango have gotten high marks in production rankings on Okinawa.

There are varieties of colorful vegetables in Yaese Town, and they are all named Yaese Town colorful vegetables, in short, called ‘Karabezi’.  The Karabezi project was started in 2009 by people involved in commerce and industry, farm folks and public employees of the town in order to promote the town through approaching local people for utilizing their products.  The land around Asato, Nakaza and Yoza districts, which are located southwest of the town, is called ‘Shimajiri maaji’ known as ideal soil for growing purple sweet potato, and one of the major producing area of purple sweet potato in Okinawa.

‘Gushichan Productive Association’ consisting of about 40 farmers, is very active in promoting the purple sweet potato, including a potato digging experience for local people and producing a new menu.  The association was the first to engage in development of sweet potato shochu (distilled liquor) made from purple sweet potato in Okinawa in cooperation with popular Awamori maker Helios Distillery.

Local high school students of Nanbu Commercial High School have developed unique noodles for Okinawa soba ‘Pi-men’ means piman (=bell peppers in Japanese) and men (=noodles). They have kneaded Yaese’s bell peppers characterized by sweet taste and rich and soft meat into Pi-men.  Pi-men has been used for school lunches in town and sold at festivals and events.