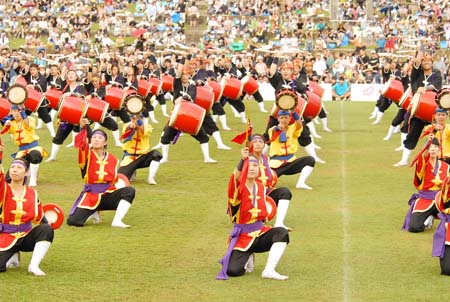 A veteran Okinawa group that’s been performing on the island for more than 32 years is presenting a show Sunday afternoon at Okinawa Shimin Kaikan.

Ryukyu-koku Matsuri-daiko plays original drums based on Okinawan traditional Eisa.  The group, initiated in Awase, Okinawa City in 1982, draws young members to the team, building a loyal following across Japan and around the world. There are now 46 branches in the country and 12 branches overseas, represented by  more than 2,500 members around the world. 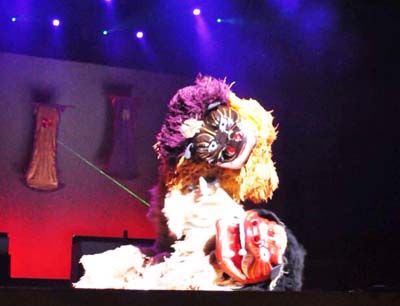 Shishimai or Lion Dance is included in the group’s performances.

Hidekatsu, who made a popular modern Eisa song known as ‘Mirukumunari’, will perform in the show.    Doors open at Okinawa Shimin Kaikan at 1 p.m. for the 2 p.m. show. Advance tickets are ¥2,000 or ¥2,500 at the door.  Tickets are available at FamilyMart e-plus, at the counter of Music Town Oto Ichiba  on the third floor, 1-1-1, Uechi Okinawa City.  Organizers say if advance tickets are sold out, there will be no at door ticket sales Sunday.  Children two years of age and younger who sit on parents’ lap do not require a ticket.