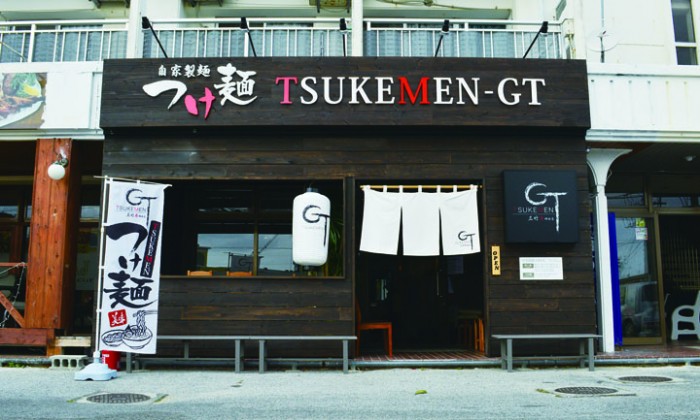 Tsukemen GT noodle shop is located on the first floor of Eagle Lodge. Free parking is in front of the shop.

A popular noodle shop has re-opened on the first floor of Eagle Lodge on Kokutai Street in Chatan.

The shop, now named Tsukemen GT, is a new branch of Sanchikuju Tsukemen, a popular and well-known tsukemen restaurant chain on Okinawa. Besides tsukemen, Tsukemen GT has also mazesoba, another type noodle dish, on the menu.  Both have become very popular and are even considered fashionable in Japan. 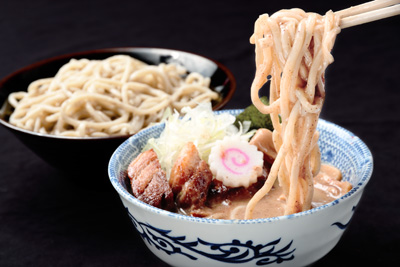 Maze soba has very little broth but plenty of toppings.

Tsukemen has noodles and broth served separately, and the noodles are dipped in the broth as they are eaten, while mazesoba has very little or no broth but plenty of various toppings that are mixed with the noodles when eaten.

Their noodles for both dishes are made every morning at the premises. They are thick and chewy. The soup for dipping is a very rich tasting mix of seafood and pork bone broth. Two kinds of tsukemen are served, called Hiyamori and Atsumori. Hiyamori – hiya meaning cold – has cold noodles that are dipped into the soup, while Atsumori – atsu means hot – has hot noodles dipped into the soup.

Their mazesoba is also really good. Eating mazesoba, noodles and soy sauce based sauce and a bevy of toppings that include slices of pork, nori, menma, kamaboko and egg. For those with a large appetite, Tsukemen GT recommends extra soup mixed with rice. They also have many kinds of side dishes including boiled eggs, spicy shrimp, Japanese lemon peel, among others that can be added to enhance the dishes.