After a couple deadly typhoon seasons, weather forecasters are bracing for an even more active time ahead. 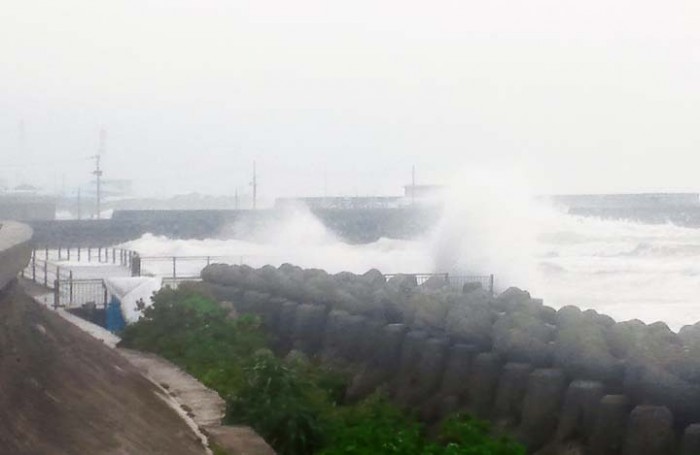 Typhoon Sanba in 2012 shows its power at Kitamae seawall.

The weather prognosticators across the Pacific are concerned that the Asia-Pacific region has already recorded seven typhoons this year, even before the official start of the season.  Of those, three have been violent Super Typhoons.  The traditional typhoon season begins Monday and runs through November 30th, although Mother Nature is known for ignoring human defined periods. 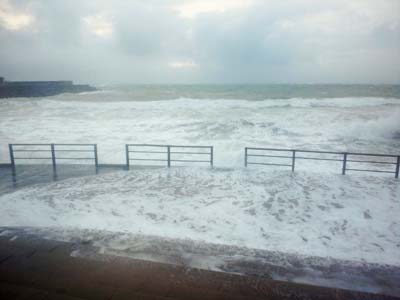 As typhoons often bring a tidal surge with them, it’s best to stay clear from the shorelines lest one gets sucked into the ocean.

U.S. Military and Japan Meteorological Agency forecasters are keeping a wary eye on the charts as they anticipate a more active six months than experienced during the past couple of seasons.  The 2013 Pacific typhoon season was the most active Pacific typhoon season since 1994, as well as the deadliest since 1975. The season began with the formation of Severe Tropical Storm Sonamu on January 1st; however, most of the first seventeen named storms before mid-September were relatively weak, as only two of them reached typhoon strength. Typhoon Soulik in July was the strongest tropical cyclone to affect Taiwan in 2013. In August, Typhoon Utor cost US$2.6 billion damage and killed 97 people, becoming the second deadliest tropical cyclone of the Philippines in 2013. Three systems in August, Pewa, Unala and 03C, continuously crossed the International Date Line from the Central Pacific and entered this basin.

The first two-thirds of the season were very weak, with only two typhoons forming despite the average amount of named storms forming. However, the season became dramatically active from mid-September. The last fourteen named storms formed within approximately two months, yet only three of them were below the typhoon strength.

Typhoon Nari brought significant damage over the Philippines and eventually made landfall over Vietnam, and Typhoon Wipha killed 41 people in Japan. Typhoon Francisco and Typhoon Lekima did not directly affect any country, but they were both violent typhoons, especially the latter one becoming the second strongest of this basin in 2013. Typhoon Krosa crossed the northern Luzon on October 31st and intensified further, although it dissipated in the South China Sea. In early November, Tropical Depression Wilma formed over the Caroline Islands, moved out of the basin, and ultimately arrived in the Arabian Sea in mid-November.

At the same time in early November, Typhoon Haiyan initially affected Palau significantly. The typhoon later became one of the most intense tropical cyclones on record and immediately made landfall over the Philippines. After arriving at the South China Sea, Haiyan made landfall over Vietnam and also impact Guangxi and Hainan provinces of China. Typhoon Haiyan, also known as Typhoon Yolanda, caused 6,300 fatalities and over US$2 billion damage in the Philippines, becoming the deadliest and costliest typhoon in the modern Philippine history.

The islands, which operate on a Tropical Cyclone Conditions of Readiness  (TCCOR) through the end of November, are wary of this season’s potential intensity, and are making preparations for an active season by issuing warnings and reminders to residents on how to be prepared.

By any name, typhoons are something to be reckoned with.  In Greek, it means whirlwind.  In Arabic it’s deluge. Mandarin Chinese defines it as a great wind.

The name typhoon evolved from southern Europe, across Arabia to India, where in 1588 it was first cast in English. It was spawned from a severe storm that ravaged India, leading officials to merge the Greek and Chinese ideas into the word that today often means severe death and destruction in Asia.

Typhoons and severe storm information will be disseminated on American Forces Radio and Television, and posted on Kadena’s weather website.