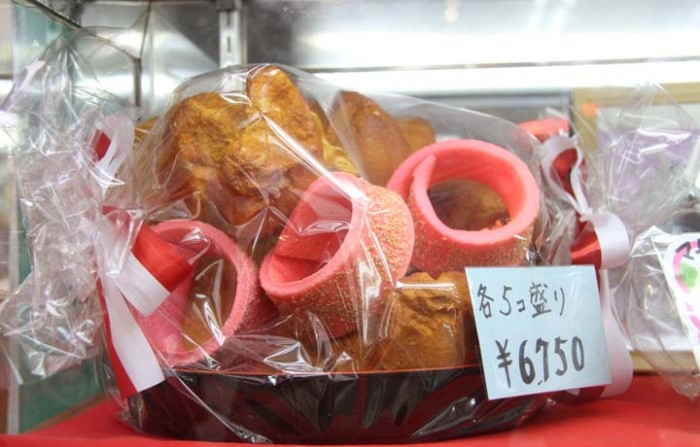 In Japan, when a couple gets engaged to get married it’s customary for the couple to host a special engagement ceremony called “Yuinou.”

The custom dates back to the old days when most marriages were arranged, and the Yuino ceremony marked the occasion when the two families would seal the engagement. Although arranged marriages are not so common any more, the ceremony still endures, although it’s usually much less formal than in the past.

The formal gifts presented to the family of the bride from the family of the groom are a sign that the families have agreed to the marriage. It’s also a ceremony that both families conclude the relationship with each other and celebrate for the prosperity of the new family.

The gifts presented to the bride’s family usually include dried bonito, dried cuttlefish, kelp and thin white noodles. Each gift has a special symbolic meaning and ensures good prospects for the wedding.

Especially in Okinawa three kinds of traditional sweets are added to the gifts in the Yuinou ceremony. The first is a giant Sataa Andagi (Okinawan donut) that symbolizes a female. The second is called Kataharanbuu, an about 20 cm long circle-shaped tempura, which symbolizes a male. The third is called Machikaji that are pink cooked sweets that mean tying together the fate of the couple. The sesame seeds in Machikaji symbolize children and their the prosperity and health. Those items are arranged on a big dish during the ceremony, and a set of the three items is served to each participant at the end of the ceremony.