History and nutritional benefits of natto 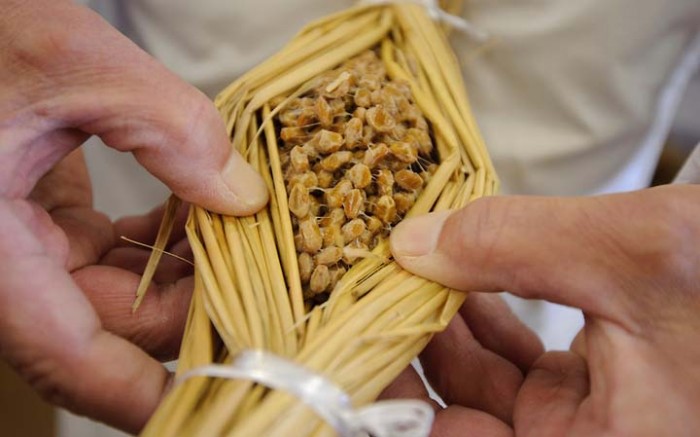 Natto in a traditional packaging made of rice straws.

Have you heard of natto? No, I am not referring to the ‘North Atlantic Treaty Organization.’ I am referring to natto, or ‘nattokinaze,’ an absolutely authentic ‘must try’ Japanese dish made from fermented soybeans. It has been traditionally eaten as a breakfast staple for over 1000 years, which most likely is part of the reason why the Japanese are well known for their tendency to live long, fruitful lives. Natto contains unique enzymes, vitamins, and amino acids that help fight heart attacks, strokes, cancer, osteoporosis, senility, and intestinal disease, to name a few contemporary ‘life-snatchers.’ This is not just another Asian ‘fix-all,’ but rather a time-tested, extremely healthy “superfood” and delicious culinary adventure that you will not regret trying. 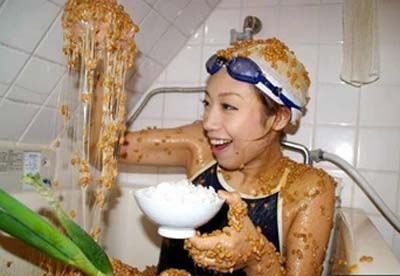 One could argue that a bath in natto is a little bit over the top.

People either love or loathe natto, as it has a very distinctive smell, a slimy, stringy texture and an acquired taste that some cannot open their minds, hearts or palates to. Natto is made from soybeans that are fermented using a micro-organism called ‘Bacillus Subtilis.’   The fermenting process makes the otherwise difficult to digest soybeans easily digestible, while increasing the body’s ability to absorb the helpful nutrients contained within it. Natto is a fantastic source of protein and is also low in calories.

To create natto, the ingredients are combined, boiled and left to sit at a specific temperature and humidity for various amounts of time, depending on the intended final flavor and consistency. The fact that there is only one ingredient needed to be added to the soybeans, has led many historians to believe that Natto was actually invented by mistake. The singular ingredient added to the soybeans is the previously mentioned bacillus subtilis, which is a live bacterium, most abundantly propagated in straw. 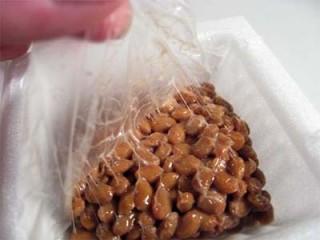 A bag of fresh natto may look a little suspicious to western eyes, but it’s really good.

Although the origin of natto is not exactly known, one story that is most commonly retold occurs during the 3rd century BC, otherwise known as the Yayoi Era. This is when the cultivation of soybeans began. As the story goes, a batch of cooked soybeans was accidentally spilled onto the nearby straw. Over time they began to ferment as the bacillus subtilis thrived. We are unsure of what level of intelligence, boredom or necessity led these people to recognize this mishap as edible and worthy of attempts to recreate this process. It is most likely that they already understood that simply boiling soybeans alone did not recreate the taste that titillated their taste buds. The second essential ingredient rested within a bed of hay.

Japanese have long been eating rice as the main staple of their diet and the popularity of natto increased when people became interested in adding more ‘flavor’ to their daily dose of rice. With natto added to a mound of rice, a balanced healthy combination was created. Oddly enough, this dish didn’t quite catch on in the Kansai Region.

For modern day Japanese, Natto is widely recognized as a convenient, nutritious food. Rich in protein and vitamins, as well as a serine protease type enzyme called ‘nattokinaze,’ It contains large amounts of vitamins K2 and compounds with calcium to assist the formation and maintenance of healthy bones. Natto also has strong antibacterial components and regulates the function of the intestines.

Now that you have been given some of the straight facts about Natto, hopefully you will take the chance to enjoy this popular health food while in Japan. If you are concerned or bothered by the distinctive smell and slimy texture, focus on the health benefits that you will gain and you might surprise yourself by actually enjoying the consumption of this dish.   If you were anything like me and were the type of child who actually really enjoyed your first sip of beer, I can guarantee that you will fall in love with Natto and find yourself looking forward to it every day.