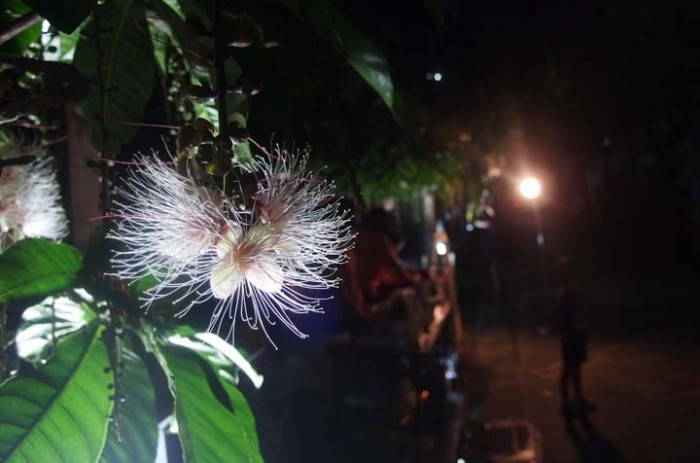 Each flower of Sagaribana blooms only one night.

Sagaribana, Barringtonia racemosa, is a tree that grows in tropical and subtropical coastal areas from African east coast to the Ryukyu Archipelago and Polynesia. In South Africa it’s know as a Powder-puff tree because the brilliantly colored petals of its flowers look like bursts of fireworks in the sky. 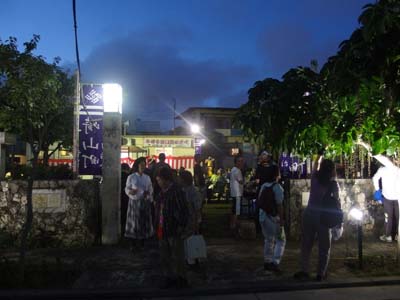 The flowers bloom only one night in the summer before falling off in the morning, but new buds appear one after another that replace those that have fallen off, so the season lasts several weeks. The flowers also give off sweet fragrance than enhances their attractiveness.

In Shuri during the Ryukyu Kingdom era, Sagaribana was called ‘Kifuji’ and was a very prized flower. On Zuisen Street in Shuri, about 30 Sagaribana trees line up the road along a stretch of about 300 meters giving out their sweet smell that envelopes the area during nights from late June through early August.

Sagaribana viewing is a popular sightseeing activity among tourists and visitors to the area and, this weekend at the start of the season, the street is lit up and made into a vehicle-free area. Live music mini concert featuring drums, flute, trumpet and ocarina are organized on both evenings of this weekend for people to enjoy the sagaribana viewing.

The sagaribana viewing event takes place this Saturday and Sunday from 7 to 9:30 p.m. on both days on Zuisen Street in the Sakiyama district of Shuri, Naha. Admission to the event is free. Organizers advise visitors to park their cars in parking areas in Naha, and use public transportation, such as the Yuirail monorail line, to get to the event, as there is no parking space around the site.