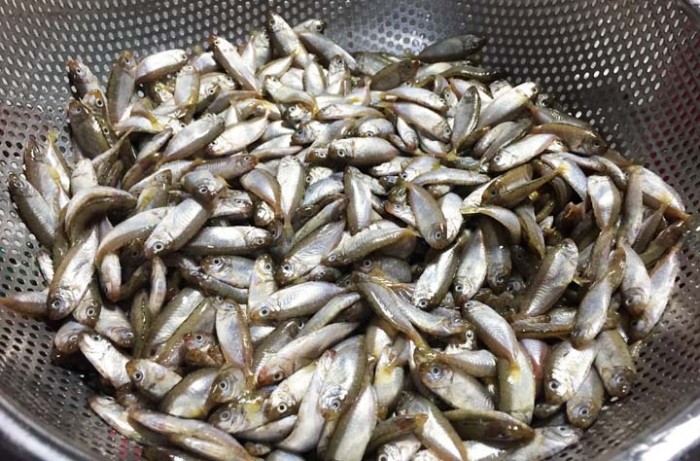 ‘Sukugarasu’ is a local Okinawan delicacy of salted fish called ‘Suku’ in Okinawan dialect. They are eaten as a side dish served on fresh cubes of tofu, and often as a snack to accompany beer or awamori.

Suku is a baby fish of siganus or rabbit fish (‘Aigo’ in Japanese), which are caught in the seas around Okinawa and remote islands. ‘Garasu’ (=karasu) means curing with salt. Suku are living in the seas surrounding the southern islands of Japan. They come in large schools to the coast of Okinawa, mostly during the spring high tides around Jun. 1st, Jul. 1st and Aug. 1st of the lunar calendar, which are the only three times of the year Suku are taken.

‘Suku’ itself are small fish, about 4 cm in length, with shiny silvery skin. To make ‘Sukugarasu’, suku fish are marinated in plenty of natural salt for about 8 to 12 months. When they are aged enough, the taste is distinctively salty, which is a perfect match to a rather bland-tasting food such as fofu.

In many coastal communities the arrival of the ‘Suku’ season is a big event. Fishermen expect Suku to come any moment on a sunny day to feed on seaweed on coral reefs starting about three days after coming offshore of the island, though they usually eat plankton while out in the ocean. Once they begin to eat seaweed, their organs start to smell. Thus, fishermen try to catch them as soon as they arrive near the islands.

For fishermen, Suku fishing is a very valuable seasonal bonus. Local media, including radio and TV, report Suku fishing every year. It is one of the annual events local people are looking forward to in Okinawa.

People normally eat Suku that has been salted in a bottle at a restaurant. However, seasonal fresh Suku is available only around this time of the year, and many fans of fresh Suku look forward to enjoying them.

Suku is mildly poisonous, mainly their tail and breast fins, and has a lot of small bones. The trick when eating them is to put them into your mouth head first. Of course they are eaten whole, and their small bones and fins with poison might bother some people’s throat if they go down tail first because there’s more chance to have the little bones and fins to stick in the throat. Chewing them thoroughly also does the trick.

Packaged fresh Suku are available at Payao in Awase Fishing Port in Okinawa City or most supermarkets on Okinawa. The price of salted Suku ranges from ¥340 for a small bottle to ¥700 for 125 g container.