In the USA and Japan, there has recently been a crackdown on a drug called ‘Spice’ or ‘K2.’ This innocuous sounding substance is actually a designer drug. It’s a legal synthetic form of marijuana that can be ingested or inhaled, just like natural marijuana. 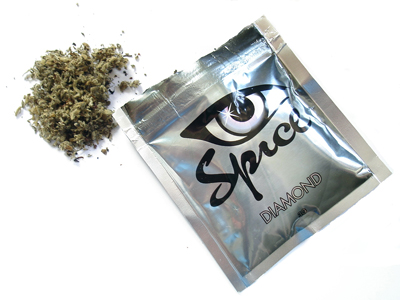 Spice was originally sold as an incense, but has now swept the military community with controversy as a illegal designer drug. However, Marine Corps Order 5355.1, issued Jan. 27, directly prohibits the use, distribution, sale and possession of it and others like it. (Courtesy photo)

Upon first learning of this drug, I was suspicious about its safety. In general, I have a tendency to believe that anything with synthetic ingredients and intended for consumption, such as margarine, artificial sugar (Aspartame) or anything else that doesn’t come naturally from Mother Earth, should be considered with a large dose of suspicion.

For those who are not familiar with what ‘Spice’ actually is, imagine dried grass clippings, incense or herbs sprayed with a noxious chemical, having similar properties to gasoline that mimics THC (the main psychoactive ingredient in marijuana). This substance is usually carefully wrapped in a decorative shiny foil bag and labeled ‘not for human consumption’ but sold to consumers by a clerk who also provides a simple ‘wink’ while uttering in all seriousness, ‘Definitely do not consume this.’

The ‘Spice’ craze has come and gone. Regular news reports about incidents of mostly teenagers who had consumed the synthetic drug and suffered frightening and near fatal effects have faded. Unfortunately, some users have even committed suicide. At it’s height of popularity in 2011, adolescent drug surveys showed that over 11% of high school students had tried the drug while 13% had tried natural marijuana. Within a year, the number of students surveyed who had used Spice dropped quickly to 7.9%.

Today, many questions still remain unanswered. For instance, where did it come from, and who invented it? Visions of some evil, depraved chemist in a pristine lab coat, mixing bubbling chemical solutions for pure corporate financial gain may come to mind but in a fact, the man who discovered the 400 synthetic chemicals that are involved in producing ‘Spice’ was someone named John W. Huffman. This individual holds no investment in any corporation that had intentions of developing the product for sale. Using a grant from the National Institute for Drug Abuse, Huffman began working on producing the cannabinoids in the early 1990s. He published academic papers that gave information on the chemical steps to make the compounds, including JWH-018, one of the easiest of the class to make and the one most often found in Spice products. “JWH-018 can be made by a halfway decent undergraduate chemistry major,” said Huffman, “in three steps using commercially available materials.” This fact seems frightening.

Huffman says that in 2008, someone sent him an article from a German magazine, ‘Der Spiegel,’ about a young man using the JWH chemicals to get high. He subsequently learned that the “imitation marijuana” drugs based on his chemical recipe had begun popping up around Europe in 2006, not long after he’d published a paper describing how to make the compounds. The compounds were also being used commercially in South Korea as a plant growth product, and Huffman speculates that they migrated from there to China, where they are now being manufactured for use in creating Spice.

Huffman warns that the consumption of the ‘Spice’ product is foolish and very much like playing Russian Roulette. The manufacturers who are now producing the drug as well as the shop owners who are selling it do not have the best interest of others in mind and are exploiting young people for their own benefit. Unfortunately, young people often have little sense of consequence as well as a tendency to believe that they are untouchable by harmful or toxic forces. This often leads many to ignore the serious warnings against using Spice and use it anyway to get high.

As Huffman said himself, smoking or consuming Spice or any synthetic product not intended for consumption will most likely be altering the chemical makeup of your mind and could affect your mental health in the short and long term.

Regardless of the intentions of the chemist, any product created in a laboratory by a man or woman wearing a pristine lab coat should be approached with great caution and understanding of the personal risks when being consumed. An easy ‘rule of thumb’ to everyone would be that if it is not created organically by Mother Earth through her own means of supplementation, then it is probably not fit for consumption by man, woman or beast and should avoided like the plague.