Performing artists from Taiwan and China present an exotic experience.

The Okinawa International Asia Music Festival ‘MUSIX’ is filling the city with a variety of music from rock, pop and Okinawan folk tunes to genres and styles from other Asian countries, as musicians and fans from across the region gather for the weekend-long music festival.

Six popular college bands from Taiwan bring an exciting line-up of performers on stage in Okinawa City, together with players of traditional Japanese, Okinawan and Chinese string instruments. 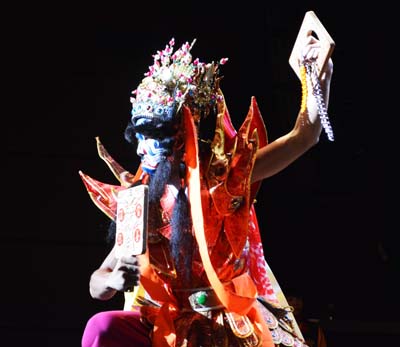 The performances are slated for various Koza-area live houses, Koza Music Town and on streets. Most of the performances are free, except for the string-instrument concert taking place at Ashibinaa Theater on the third floor of Korinza Mall on Sunday.

On Friday, six popular college bands from Taiwan will perform at two Koza live houses, 7th Heaven Koza, where the entry is free of charge, and Live House Remy’s that has a ¥1,000 cover charge.

The six Taiwanese and four student bands from Japan will perform in a free concert on Saturday at Ashibinaa Theater starting at 14:00. One Taiwanese college band will also appear on the Okinawa International Carnival stage on the first floor of Koza Music Town Sound Market at 14:30. The event is free. 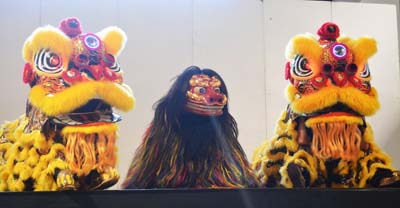 Masks of the Chinese ‘Lion Dance’ are quite different from Okinawan Shishimai.

Another free music recital on the same stage runs from 18:30 to 19:30 featuring the Chinese string instrument erhu.

The main concert on Sunday is called “Asia’s traditional performing arts and Japan” that features music of three Asian instruments, the Chinese erhu, Okinawan sanshin and Japanese Tsugaru shamisen. The concert takes place at Ashibinaa Theater at 17:00. Tickets are ¥2,000 in advance and ¥2,500 at door. In the concert, Erisa Uechi plays erhu, Naoko Hentona is on piano, Yukito Ara with Sunday plays sanshin music, and a Japanese duo ‘Anmitsu’ plays Tsugaru shamisen.

Anmitsu also performs at Gate 2 Fest stage at Music Town from 12:00 to 12:30. This performance is free