A unique and entertaining show based on Okinawan Karate takes place at the National Theatre Okinawa on Nov. 13th. An additional show is scheduled to Jan. 15th, 2016.

The organizer says the show is entertainment with audience participation. It also aims at explaining the history and essence of Karate. 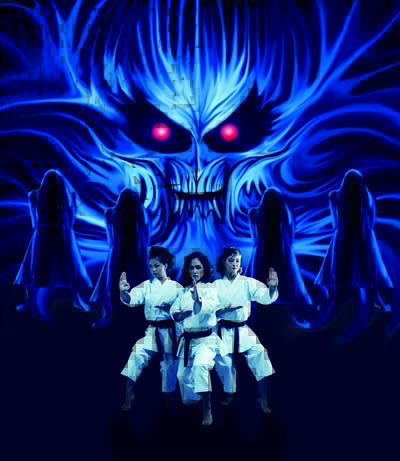 A group of young girls train karate to take on bad guys who rule the city.

The storyline goes something like this: “It’s a day in the future in Neo City, Okinawa. In the ruined downtown, local people are suffering under bad guys who use the strongest martial arts to keep control of the city. A group of young female karate trainees who are practicing to master traditional Okinawan karate will get up to beat the bad guys for justice. And then the girls will be led to discover the secrets of an unforeseen ultimate martial art, ‘Neo-Karate’.”

Takemitsu Nosoko, the director of the show esplains that his aim was most of all to promote karate and philosophy behind it. “We made the show enjoyable, simple to understand and exciting in order to educate people all over the world how wonderful karate is. However, the karate part itself in the show is strictly performed following the traditional way of karate, and adhering to the spirit of the saying, ‘Karate ni sente nashi’ (There is no first strike in Karate). In other words, karate is not for an attack? We created the show with confidence so we really hope people to reaffirm and share the roots and wonderful ideas of karate together. We are sure that not only men and women of all ages but especially people from overseas enjoy the show!” Nosoko said. (For more information, see; http://dandjurdjevic.blogspot.jp/2014/01/karate-ni-sente-nashi.html).

The show on Nov. 13th will start at 19:00 with the door to the theater opening 30 minutes earlier. Tickets cost ¥2,000 for adults and ¥1,500 for high school students and younger persons. They are on sale at the National Theatre Okinawa, Ryubo Department Store and Co-op Apre.