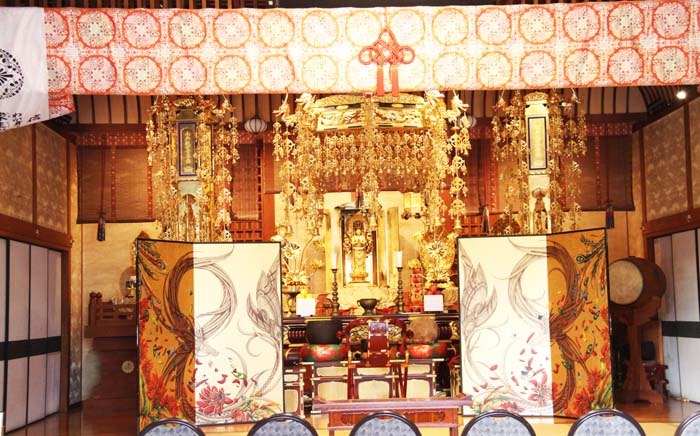 The screens with Kiyota Oshiro’s pointillist creations are in front of the main altar in the temple.

One of the best known and most popular artists in Okinawa, pointillist Kiyota Oshiro, is holding his newest art exhibition at Shuri Kannondo temple that is one of the most famous and oldest temples on Okinawa. 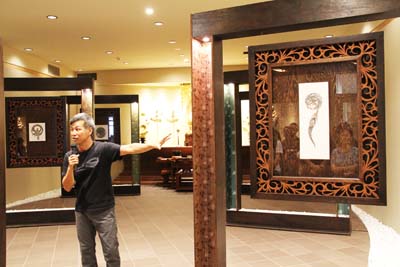 Oshiro explains his art at the temple gallery.

Art exhibition in a temple? Many people usually feel uncomfortable about the idea when they first hear about it, but it’s actually really nice and fitting environment for his art, because much of Oshiro’s art is related to religion and gods.

The master of the Shuri Kannondo temple proposed the idea to Oshiro and his good artist friend YOKANG to jointly create a folding screen that would be a collaboration of pointillist art and color design. The two were intrigued with the idea and accepted the task.

They created their piece of art on a folding screen and presented it at the temple on the New Year 2015. 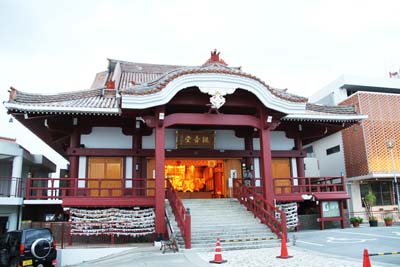 The exhibition is now finally open, and continues until Nov. 23rd.

During the exhibition, Oshiro conducts daily tours from 13:00 and 16:00 to explain his art. Although the tours are all conducted Japanese, even people who don’t understand the language can get a feeling of his art through listening to the tone of his voice.