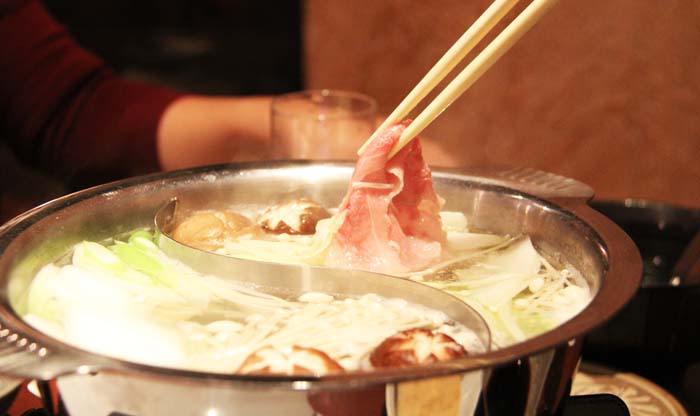 Shabu-shabu is simply thinly sliced meat and vegetables boiled in water on your table.

Momogami is an Izakaya-type restaurant located on Kokusai Street in Naha that is directly managed by Helios Co., a local brewer of craft beers and distiller of well-known popular awamori brand “Kura.” The restaurant recently started a new course menu of ‘All-you-can-eat Shabushabu,’ with the specially that the course comes with a bottle of “Kura” awamori if the diners come in groups of four or more people.

Shabu-shabu, of course, is a Japanese dish of thinly sliced beef boiled in a pot of water on the table communally in front of the diners. 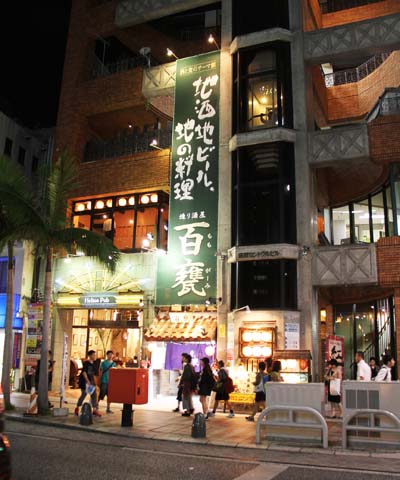 Momogami is located on the 2nd floor above Helios Pub on Kokusai Street.

At Momogami, two kinds of meat are served for Shabushabu. One is A5 and A4-ranked Motobu Beef, which means the highest ranked Motobu Beef certified as Japanese Wagyu that is raised on a farm in Motobu Town. The other is Okinawan native pork known as “Aguu.”

The customer can eat these two kinds of meat as much as they want in a span of 90 minutes. The special, a bottle of “Kura” awamori is served at no extra cost to customers dining in a group of four or more people.

Kura is 100% three-year-old kuhsu, or aged awamori. The Okinawa Awmori Association changed the definition of bottled kuhsu this August. The new rule is that kuhsu bottled after Aug. 1st this year has to contain the full volume of liquor that has to be aged three years old or more. So if Awamori makers want to label their products ‘kuhsu’, it is mandatory that all of the contents is aged three years or more. 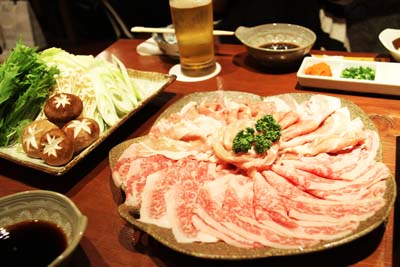 Momogami Shabu-shabu set offers as much pork and beef as you can eat in 90 minutes.

Helios Co. was prepared, and now boasts a large volume of stock of their three-year-old kuhsu, and the company wants to promote its product and get as many people as possible to enjoy their100% real amber-shade kuhsu matured in wooden barrels.

The shabu-shabu dinner is available for two or more people. The cost is ¥2,980 per person for adults, not including the 8% sales tax, ¥1,580 for children of 6-15 years of age. Children of 5-years of age and younger eat free. Parties of four or more adults receive a free bottle of 100% three-year-old Kura Premium Gold awamori. The dinner consists of A5/A4-ranked Motobu Beef and native Ryukyu Aguu pork for 90 minutes.

Momogami is located on the second and third floor above the Helios Pub on Kokusai Street in Makishi.