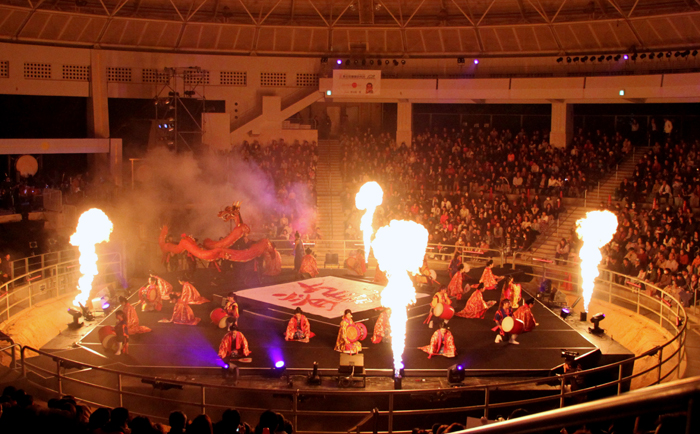 Ryujin-no Utage is staged in Ishikawa Dome at the center of the venue with audience watching from all sides. The show plays on two nights and features many spectacular effects.

People of the Ryukyu Kingdom believed that Ryujin was a God who reincarnated into a dragon, and controlled and governed water. To please the God, people used music and Taiko drums, and those ancient rituals are the basis of a musical spectacle that takes place in the Ishikawa Dome on Dec. 12th and 13th.

The performance proved to be so popular last year that organizers decided to add a second day in order to accommodate all the people who want to see this magnificent show that oozes Ryukyu traditions and mystery. 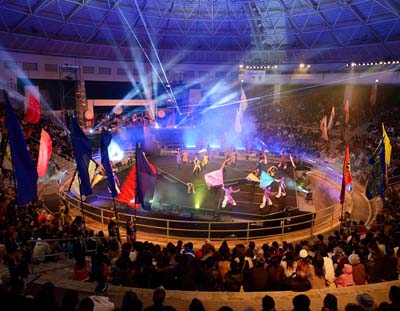 The show brings both classic and modern Okinawan performers on the same stage.

The performance incorporates the dragon theme throughout the show. The performing art show mixes traditional and classic and modern dance and music. The stage is in a bullfighting ring in the Ishikawa Dome, in a facility usually used for Okinawan-style bullfighting where spectators can sit to watch the show from any side.

More than 20 groups and performers will take part in this amazing performance on stage. The host group Ryujin Densetsu is known for its variety of powerful acts mixing Eisa, lion dance and Hatagashira. Hidekatsu is familiar composer of modern version Eisa songs, local popular singer Chiaki and ‘Ryukyu-koku Matsuri Daiko’ that performs regularly both in Okinawa and outside of the Island and overseas are among the performers. Violinist ARIA and modern ballet dancers will add some spices on the stage.

Doors for the performance at Ishikawa Dome open at 16:30 on both days, and the show starts at 18:30. Advance tickets for S-seats are ¥3,000, and general seats ¥2,500 for adults in advance. High School, junior high school and elementary school students enter for ¥1,500 in advance. All tickets costs ¥500 more at door. Admission is free for pre-school age and younger children provided that they share a seat with a parent. Tickets are on sale at Familymart e-plus, and studio café ‘ROSSO x ROSSO’.

The show has a Japanese language homepage.  Japan Update has three pairs of free tickets to the Sunday show (Dec. 13th) to raffle among our readers. To take part, go to facebook and search for Japan Update, and just give a message.

To get to Ishikawa Dome take Hwy 58 north from Kadena. After passing Okinawa Renaissance Resort, take the road towards Ishikawa. The silver color Ishikawa dome is on the left just after you pass under the elevated Okinawa Expressway. Free parking is outside the dome.