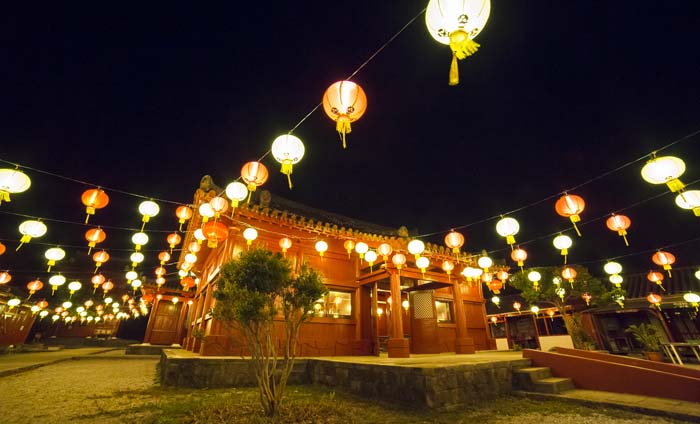 Lanterns are a ubiquitous part of any fast-eastern cityscape, especially those made of paper. They have been used to decorate buildings and parks for so long time that many people simple fail to take a special notice of them even though many of them are real pieces of art on their own.

Yomitan Village Government in cooperation with local businesses and the commerce and industry associations in Yomitan Village are organizing the first Yomitan Lantern Festival at the Murasaki Mura Theme Park. The lanterns are lit every evening from 18:00 to 22:00 from Dec. 1st through Feb. 21st, 2016.

The Murasaki Mura Theme Park was originally constructed as a setting for a Japanese national television NHK drama “Ryukyu-no Kaze” that was marketed in English version as the “Dragon Spirit.” The TV drama ran on the national TV in 1993.

The theme park is a reconstruction of a streetscape of the Ryukyu Kingdom era in the 14th to 15th century. During the festival, the lantern lights illuminate stone pavements and red roof tiles in every corner of the park. Most of the lanterns are Chinese style, as China had a strong influence on the culture of Okinawa in those days, as Okinawa became the first overseas country to have a tributary relationship with the Chinese Imperial court, and conducted flourishing trade between China and Japan.

In addition to the lanterns, Ryukyu Mura will have stage events featuring traditional performing Ryukyu arts. A projection mapping show is added to entertain visitors, and local restaurants will set up stalls to sell food and drinks as well.

The admission is ¥600 for adults of college student age and over. ¥500 for junior and high school age students and ¥400 for elementary school children.