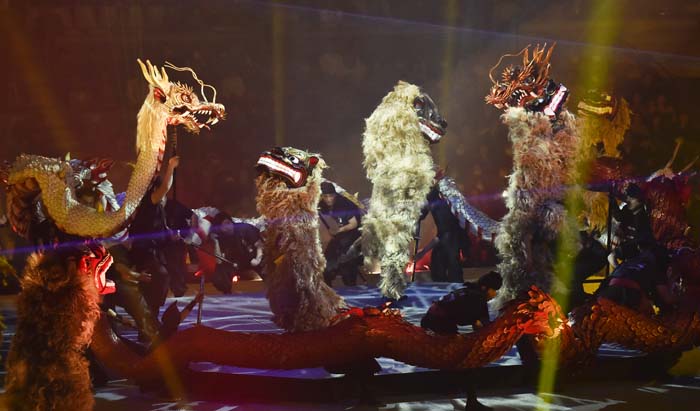 Dragons and lions abound in the show as they have always held an important place in Ryukyu mythology. 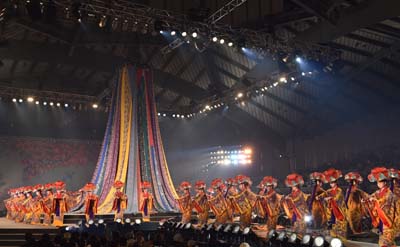 Hundreds of performers participate in the spectacular.

The show that initially began with the concept of revitalizing traditional Ryukyu festivals and performing arts that were in danger of being lost, forgotten or left behind as Okinawa moved into the 20th century has proven to be so popular that it has been held for the past 33 years to packed audiences of spectators who come from all over Japan to see it. 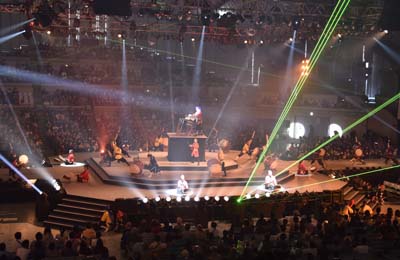 The stage is at the center of the Convention Center main hall.

performances. This year, the Mori no Nigiwai Okinawa stage is set up with the theme of “like a breath of spring,” focusing on the islands’ “pleasant breeze, blue sea, and blooming flowers.”

The audience can look forward to a spectacular stage decked with the “fusion of the gorgeous Ryukyu Kingdom period and cultural performing arts of the local people passed down through generations.”

The show lasts about three hours. The program includes many dances performed at auspicious event during the time of the Ryukyu Kingdom to welcome delegates from China and elsewhere. These dances were also performed to entertain high officials and distinguished guests at other occasions. 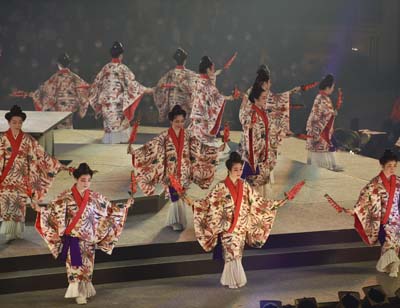 All parts of the show are related to certain periods and places.

The program consists of meticulously collected pieces of performing arts from various times and places in Okinawa, combining them into a single show for people to enjoy. Over the years, the event has increasingly taken on protecting and nurturing traditional culture and contributing to the support of artistic activities of young people engaging in original and creative performing arts.

A total of four shows are presented at the Okinawa Convention Center Event Hall in Ginowan, two each on Saturday and Sunday. Doors to the first shows open at 11:30 and performances start at 12:30. For the second show each day, the doors open at 15:00 and the performances begin at 16:00 The 13:00 show on Saturday has been sold out. Tickets are available at FamilyMart and Lawson convenience stores, and on line. Admission is ¥2,500.