Dog poop and stray cats are nuisance at Sunabe Seawall 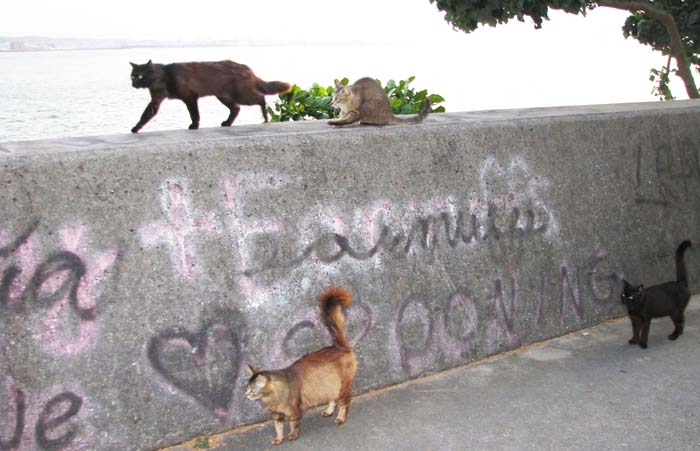 Stray cats are taking over the Sunabe Seawall thanks to ignorant people feeding them.

I feel very blessed to live along the Sunabe Seawall. It’s a great place to escape for a stroll after work to relieve some of the days’ accumulated stress. Drifting along the waters edge as you take in the evening sunset, the enjoyment can come to an abrupt halt upon realization that you have treaded deeply into a fresh pile of dog poop. Carefully releasing your foot from this unpleasant surprise, the double whammy of the smell wafts into your nose and throws your head back as you curse the audacity of the self-centered pet owners who do not take responsibility for their own doggy’s doo-doo. 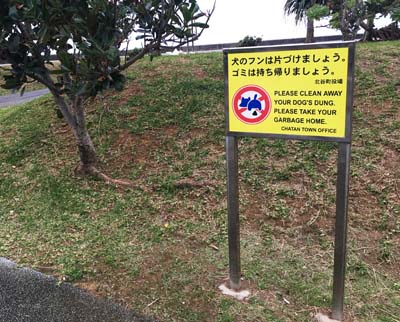 This sign should make it perfectly clear to dog owners what is expected.

If you have ever walked along the Sunabe Seawall, then it is most likely you have shared in this experience or at least noticed the abundance of canine crap. I have actually witnessed dog walkers put the poop into a plastic dog poop bag, jog off to an obscured area and toss said bag into an area that is even more difficult to see, but easy to smell.

The poop has gotten so bad that the Chatan Town Office has now posted English language signs every 50 meters because the original signs posted every 100 meters were not enough to stop dog walkers from dropping, tossing or abandoning their dogs’ excrement in the public space.

Usually, it is not the pet owners who walk their furry friends in the daylight who are the culprits for this poop atrocity. The clever but lazy owners, who usually commit this sort indiscretion, wander in the evening darkness with a sense of liberation from the judgment of onlookers. They saunter out into the night with the audacity to believe that by encouraging their pets to relieve themselves on the grass, they’re actually doing us all a favor. It is hard to understand that the best of these folks believe natural process will break down the poop and provide nutrients for the grass. In fact, it gets stepped on and slid through by kids playing on the seawall or it lies in perfect formation, attracting flies and exuding its distinctive gut-retching stench.

Along with dog poop, there seems to also be a fair share of cat crap along the seawall. At the southern end, many people congregate to catch fish. Unfortunately, the smell of the catch also attracts a large gathering of cats. These felines are strays and often hang out in the grasses.

At first glance, it all seems very harmless until the real problem becomes apparent. The cat population has quickly exploded from 1-2 cats randomly sighted there to a regular congregation of 20+ cats, and their numbers will only continue to grow.

Some people play the Mother Theresa role, take pity on these cats and bring them food. This only creates cats who become dependent on humans while losing their incentive to participate in positive feline tasks that we rely upon to keep the seawall clean such as hunting and eating rats, mice or cockroaches. Instead, they laze on the grass, pooping and reproducing.

I gave the Chatan Town Office a phone call to enquire about the problem, and discovered that the local by-law officers do not have quarrel with the feral felines as they are said not to carry disease. The nostril-scorching stench of their excrement makes this hard to believe.

My advice to the many residents at the seawall is that, although it makes you feel good to ‘help’ these animals, you are actually doing them a disservice. So, please do not feed these stray cats. Your ‘philanthropy’ is actually creating a bigger problem. When these cats are provided with easy access to food, they no longer have the desire to work for their food. They become disengaged from seeking out the mice and cockroaches, which are the vermin we really do not want. At the same time, pet owners are strongly encouraged to pick up their pets’ poop, and dispose of it properly every time to ensure that the seawall remains a safe and pleasant place for all of us to bring the kids or to unwind after a hard day’s work.