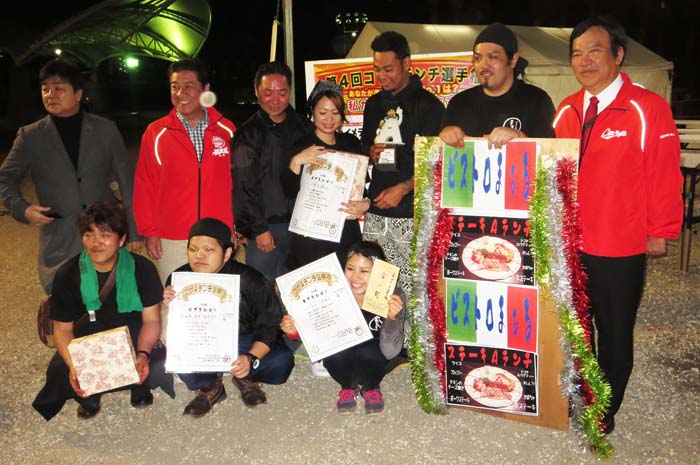 Last year’s winners smile with their awards and bragging rights.

The A-Lunch concept began in Okinawa after World War II, when an Okinawan chef returning from New York had the idea to create an A Lunch, B Lunch and C Lunch, denoting expensive, moderately priced and inexpensive meal sets, usually served on one plate. It caught on, and is now everywhere in restaurants in Okinawa, and across Japan. 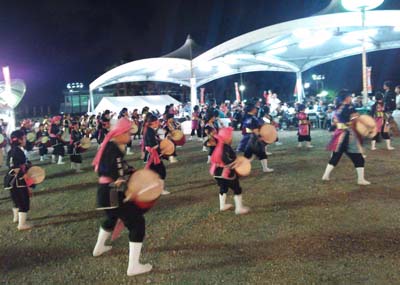 The A-Lunch contest also features Eisa and other entertainment.

The competition began in 2011, and proved immediately a hit. Last year more than 20,000 visitors come to sample foods at Koza Athletic Park open space in front of the Koza Shinkin Stadium in Okinawa City, which can be easily described as the hub of American-style eateries and foods on the island.

Over the years, the event has grown from a small start with fewer than a dozen restaurants from in and around Okinawa City to dozens from all over the island, all putting their best creations in front of the people to judge.

In this year’s event, the restaurants compete for the best A-lunches with steaks added into menus alongside with traditional hamburgers, sausages, seafood, eggs, spaghetti and vegetables. Admission to the event is free, but to take part in tasting and judging the food, people have to purchase one (or more depending on how hungry they are) ¥1,000 book of tickets for the meals. After tasting and comparing the foods, visitors can vote for the Grand Prix winner.

The contest takes place this Sunday, from 11:00 to 20:00. In addition to the gourmet contest, a variety of events to entertain the visitors takes place, including an Eisa performance and a classic car exhibition.