Okinawanderer Okinawa News travel › LIFE › Living › ¥1,000 gets you ‘senbero’ – a couple of cold ones and snack 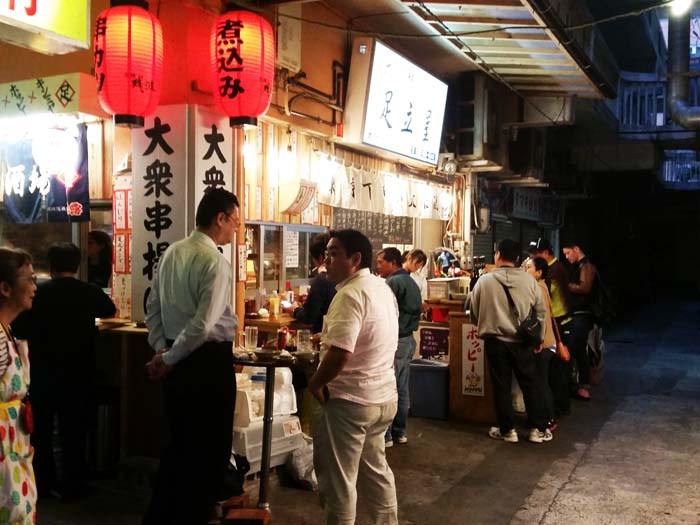 Summer is just around the corner, and that means days are getting much longer! So, what is your favorite thing to do in the summer?

As most people know, Okinawan people love to drink, on beaches, Izakaya pubs, bars and many other places. Hot sunshine matches a cold Orion beer or glass of Awamori very well! 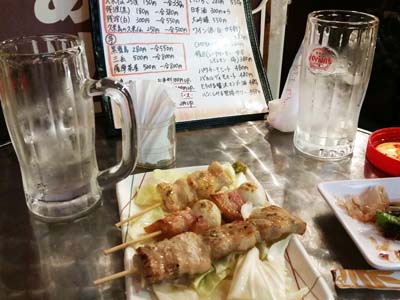 Typical ‘Sembero’ set consists of a couple of drinks and a snack, like a couple of sticks yakitori or other inexpensive pub fare.

A new style of enjoying a few cold drinks on a hot day is now getting popular on the island. The fad is called ‘Senbero,’ with ‘sen’ meaning a thousand and ‘bero,’ although not an actual word, conjures up an image of being drunk or having a ‘buzz.’ So, ‘Senbero’ means something like ‘1,000-yen buzz.’

Its up to every and each restaurant how they translate the ‘senbero,’ but in most cases ‘senbero’ means a special of the establishment consisting two or three mugs of beer or some other alcoholic drink like chu-hai, and an appetizer to go with the drinks, all for a fixed price of ¥1,000. The fad of ‘senbero bars’ started in Tokyo a few years back but is now catching up throughout Japan.

Many local stand-up bars and izakaya pubs have recently started offering ‘senbero’ and some even have added ‘senbero’ on their day-time menus. Now, one can question where’s the moderation if you start at noon, but people who love to drink can start the party from early in the day, and can also be done early. Of course, the danger is that some people love their ‘senbero’ so much that they will continue drowning them one after another from daytime through midnight and later.

On the other hand, ordering ‘senbero’ gives people a perfect excuse to leave the party early. Just grab the ¥1,000 set, have the two or three drinks and the ‘tsumami’ snack and leave. Normally, it can be hard to leave a drinking party at an izakaya early, especially, when everyone is expected to pay their share, and one does not know how much is expected as alcohol is usually ordered by a bottle that everyone shares, but the bill does not arrive before the party is over. Some people don’t like to share the bill equally because some people drink and eat a lot whole some don’t. ‘Senbero’ makes leaving simple, just pay your ¥1,000.

So, where can you get a chance to order ‘senbero?’ In downtown Naha there’s an area called ‘Makishi Kousetsu Ichiba (Makishi public market)’ where ‘senbero’ is very popular, Sakurazaka area is another, and it’s also known now in some places in Okinawa City.

‘Senbero’ is not new. It’s origins date back to old Japan, when it was called “Kakuuchi”. Long time ago there were Japanese sake shops that sold sake by cup at a reasonable price. Customers drank a cup or two in a certain corner of the shop standing up. The custom was kept alive in a few traditional establishments downtown Tokyo or other large cities, until someone rediscovered the custom, and it was revived with a modern twist.

In Japan, many people are nowadays very much fascinated with old-fashioned styles and customs. And in any case, whether you are a tourist or local, spending just ¥1,000 is a cheap price to feel nostalgic and feel the good old days in Japan, even on Okinawa.