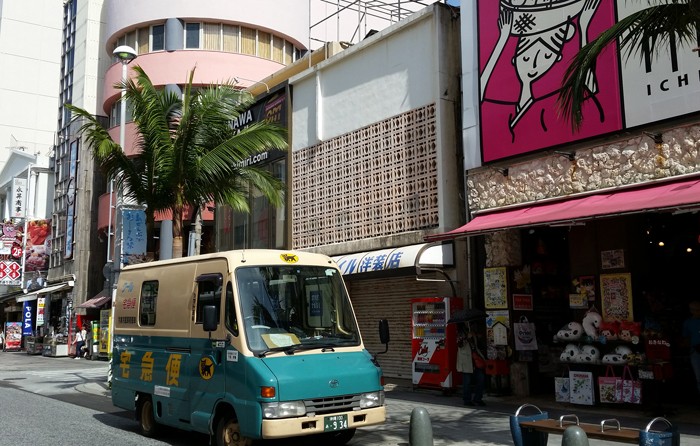 A building wall made of ‘hana blocks.’

For foreigners, or even visiting mainland Japanese, the most striking feature in Okinawa is the use of concrete for almost anything. Most buildings here are made of concrete, and so are utility poles and even benches, tables and guardrails in parks and other public areas. 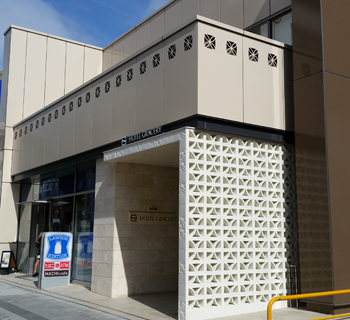 Hana blocks are still used in modern buildings because of their artistic value.

The reason is simple. Concrete reinforced with iron bars is the strongest material against Okinawa’s hot and humid climate. Add to that the regular typhoons that batter the islands several times each year, and now you know why concrete is the preferred building material.

If you look around more carefully, many buildings, especially a little older ones, have walls and balconies constructed using special fancy looking concrete blocks. They are called “hana blocks” in Okinawa, literally “flower blocks” in English, although most of them are not shaped like flowers. Some of them have circle, others square, geometric designs.

They are used only in Okinawa, and even mainland Japanese don’t know what the “hana blocks” are. Why they are called “hana blocks” no one knows for sure, but a popular assumption is that the designs relate to traditional Okinawan patterns of cloth. The designs were handed down from generation to generation and are distinctive to different districts in the prefecture. There are many different patterns and some look like geometrics and are called “hanaui” or “kasuri” patterns. 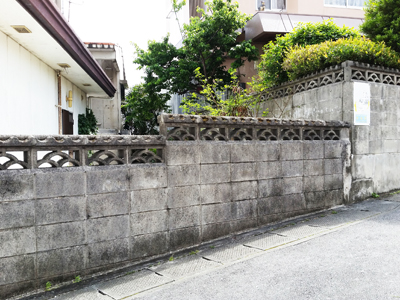 Surprisingly, the reason is the U.S. Military. During WWII, most houses on Okinawa were destroyed. When the U.S. Military took over the island and started to build base facilities, they imported a lot of construction equipment form the U.S. and machinery to produce concrete blocks were some of the most basic machines brought from the U.S. as concrete was not widely used on Okinawa before the war. The U.S. military needed plenty of facilities built in a short period, and of course, many Okinawan people were employed in building the facilities.

Americans used fancy shaped blocks to decorate the concrete walls of the military facilities, and after a while, local people of Okinawa adopted the fancy blocks to their own houses. They eventually changed the designs to their own original shapes, and now you will find plenty of fancy wall blocks throughout Okinawa.

People soon noticed that making their houses using concrete blocks suited very well to Okinawan climate. Using concrete blocks for the houses sheltered people from strong winds during typhoons, and also flying debris. In the hot climate of Okinawa people could sleep with open windows because “hana block” wall was built to cover the window opening that lets air thorough while keeping residents safe. The fancy shape also works as a blind against strong sunshine.