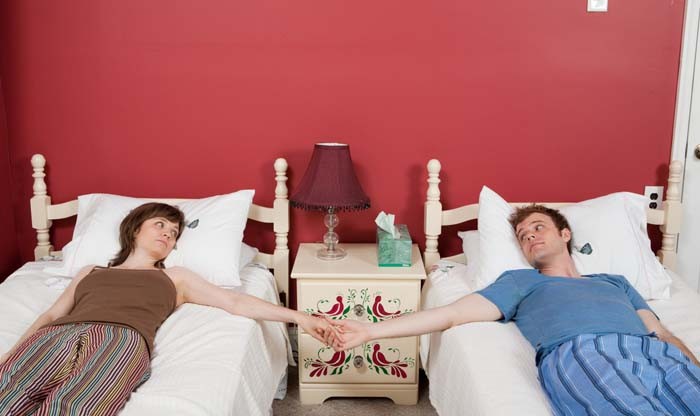 Separate bedrooms may not be that bad idea after all…

It all began with a fight that led to a divorce… a night divorce. My wife and I always seem to get into an argument around bedtime about what time we should go to bed. I am like a lark in need of an early sleep while my wife is more like an owl, and tends to stay up and play on the internet into the wee hours of the night.

After years of asking my wife to go to bed earlier, we finally agreed to disagree and experimented with a compromise. The deal was that she could stay up all night if she wanted to, but would have to sleep on the couch so as not to wake me up when she finally decided to turn in. She agreed and we gave the arrangement a practice run.

During that week, my wife was free to frolic and scamper around the Internet, chain-viewing Youtube video after Youtube video in total bliss. This left me alone to stretch out across our queen-sized bed like an eagle spreading its’ wings to full span. I was able to sleep uninterrupted, and experienced some of the most peaceful nights slumber I have had in quite some time. The anticipation about what wee hour my wife would decide to rumble into the bed, and the effect that had on my ability to fall into a restful sleep, was nonexistent. My sleeps were long, deep and refreshing.

Every morning I woke up feeling so refreshed and revitalized that I started to think that maybe we were doing something wrong. The guilt began to build as I tried to process the reality that this might be an indication our relationship was falling apart because night-night time was not happening together. Were we becoming like Lucy and Ricky from the famous 1950’s sitcom “I Love Lucy” who constantly fought and then slept in separate beds like brother and sister?

A bit timid about forging this conversation, I began by asking some of my closest friends who much to my relief, admitted to experiencing similar sleeping arrangements. I was reassured to discover that ‘night divorce’ is completely acceptable and practiced by more couples than care to admit. Most of us sleep with our partners because that is what we saw growing up, and that was what our circle of friends recognized as symbolic of a healthy relationship.

It turns out that Japan is the leading country to follow this practice. About 53% of all young couples in Japan actually sleep in separate rooms. Some believe that this stems from the tradition of having infants sleep alongside their mothers. Japan also has a much lower divorce rate than other western countries where divorce is as high as one in every two couples.

I asked myself, where this wide spanning understanding that couples are expected to sleep together originated? It turns out that historical evidence of marital bedtime habits is not as easy to track down as I had hoped. What I did discover is that it seems to stem from habits dating back to pre-industrial revolution times when an average poor family was fortunate if they had one ‘family’ bed, on which they all slept for warmth and comfort. With increasing wealth in many countries, children were provided their own beds, but the habit of couples sleeping together prevailed. Sleeping apart has become an opportunity that we are not taking advantage of simply because it is not often considered an option.

We can all sleep easy knowing that recent studies have found that outside of Japan, 40 percent of couples sleep in separate beds. Apparently, a study by the ‘U.S. National Association of Home Builders survey predicted that 60 per cent of upscale homes would be planned with two master bedrooms this year. Once I realized this, I thought about all of those years I was being starved of sleep as my internet addicted wife lay wide awake watching endless videos of cute cat & puppy compilations.

For the more egalitarian beasts of this decade, sleeping separate is a great set up. Considering the heavy work schedules of todays’ high-octane professionals, sleep comes at a premium, and all of us could use a little more of it.   Getting a night divorce has actually helped make myself, and my wife’s life much happier than when we regularly slept together. We appreciated our ‘trial run so much that we decided to purchase two beds to assure that we both can have the benefits good nights’ rest.

Whether your partner or yourself, is a sleep walker, sleep talker, midnight muncher, late night gamer, early morning treadmiller, incessant snorer, sleeps hot as a furnace or flip flops like a fish, the night divorce might actually be a marriage savior. I would advise any couple who is experiencing sleepless nights to consider giving a night divorce a try. Experiencing a few restful nights of sleep might make you and your partner converts, too.