Uruma Shimin-no Mori presents hiking and adventure for all 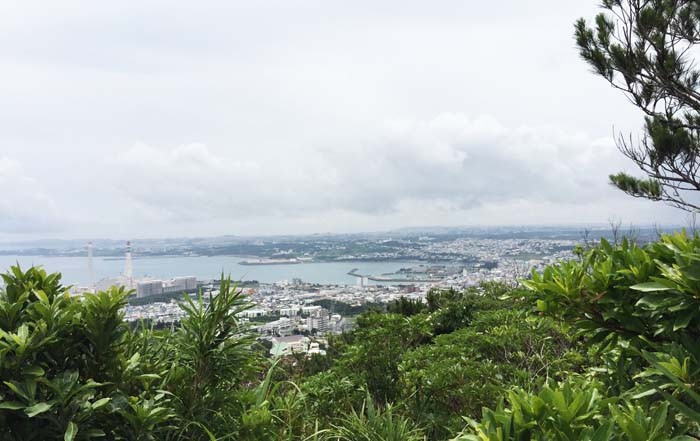 The view over Ishikawa from the top of the hill is quite impressive.

Just off the Okinawa Expressway exit 6, there is a precious hidden gem for those who are seeking a hiking adventure over a weekend. After an inebriated friend at a party had given me some funky Google map directions, we awoke the next morning with an open weekend ahead a hankering for a new adventure. 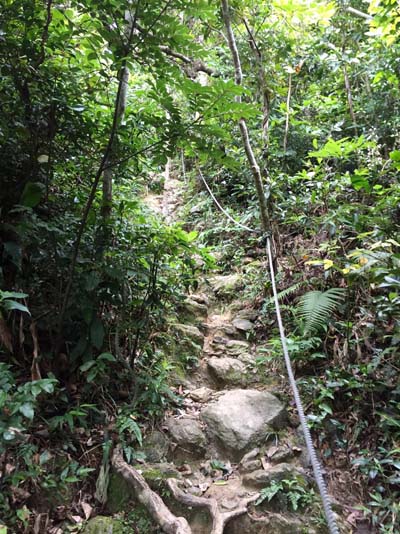 Ropes are set to assist climbing at the steepest parts of the trek.

I am quite unfamiliar with this part of Okinawa as there has never been much reason to drive around the out stretches of Uruma City until this secret gem was described to me as an exciting and challenging but safe sequence of trails with an abundance of breathtaking views. Both my wife and I are always eager to seek out any new adventures that Okinawa has to offer so we were immediately drawn to the hunt for these trails that are ‘off the beaten track.’

Along the way, we noticed two golf courses. Once you have made it to the Higashiyama Country Club, drive just a bit further up the road to the parking lot where the trailheads can be found. There are multiple hiking trails available to choose from as you make your way towards the rewarding panoramic views that await your arrival at the summit. We took several different trails, varying in difficulty. My wife coined one of the less challenging trails as ‘Over the age of 50’, the other routes ‘Under 39 years of age‘, so there is plenty to choose from for every level of adventurer. 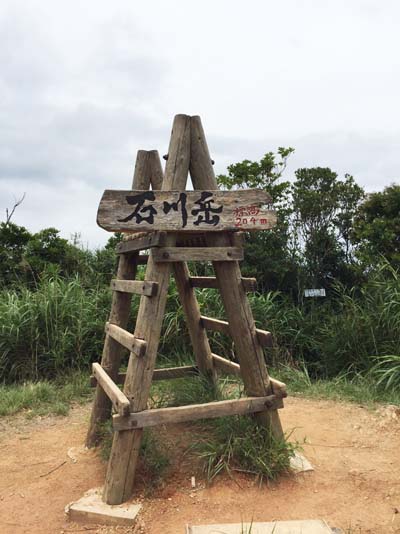 A wooden marker pinpoints the highest spot on the top.

There were some exciting parts of the ‘Under 39’ route that included a rope to use to help you climb up the steep sections that come with a slightly offsetting sense of danger. My wife being Okinawan, was concerned about the chance that a Habu snake would fall from a jungle tree onto the back of her neck but we saw no snakes on trees or on the trails the entire time. It would be safe to say that the probability of being bitten by a snake is extremely low but that the chances of being bitten by a mosquito are almost certain. Luckily, we had brought along some mosquito repellant and with a small amount of that made a big difference as I didn’t get bit once the entire day.

After a fulfilling day of hiking around the park and a peaked sense of adventure, I returned the Google maps to take a look at all the little roads and trails winding through the surrounding area. A small area to the northwest had drawn my interest when we had driven by, but now seeing it on the map, it turns out that it is a fenced Japanese military installation area and essentially a dead end. What I did recognize though is that if you continue north, you can follow the trail right to Yaka Dam.

All in all, I discovered that the Uruma Shimin-no Mori Park is fun and offers outdoor activity for all levels of fitness. Once arriving at the trailheads, it is possible to take a few hours to climb the summit and back. At this rate, you will defiantly burn enough calories to justify a big fat filled lunch of your choice. Whether you have a free afternoon that you would like to pack with a family adventure or even a full weekend and would prefer to take your time slowly exploring the trail and vista options, the park is accessible to all, and best of all, it’s free of charge.