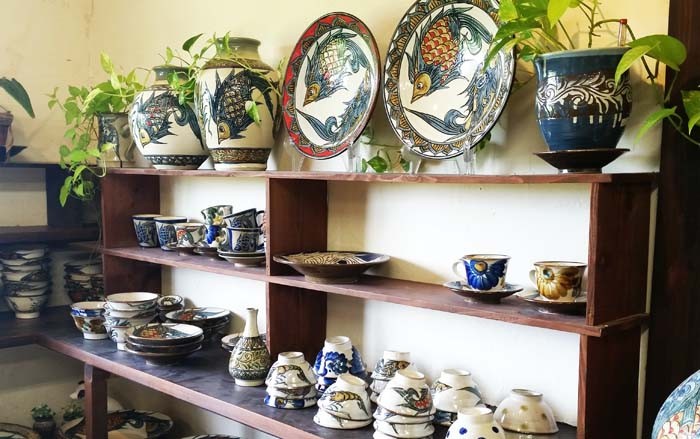 Fish and shrimp motifs are the trademark of Kinjo Ichimon pottery.

Anyone interested in Okinawan pottery knows the name of Jiro Kinjo. He was a pottery artisan who became the first Okinawan to have the title living National Treasure bestowed on him in 1985. 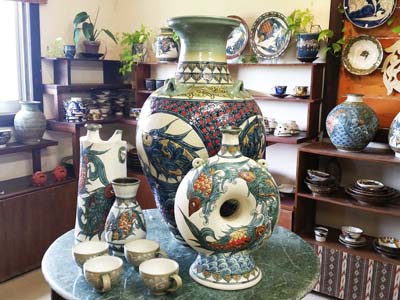 Bold red accenting the design are the trademark of Hideyoshi Kinjo.

Kinjo’s specialty is the design. Pottery with a fish or prawn motif became his trademark. Traditionally, there were plenty of pottery created on Okinawa with a fish or prawn depicted on it, but Kinjo refined the motif right after the war ended, and now almost all fish designs are made in the style created by Kinjo. Specifically, Kinjo did not just paint the pictures on the pottery but made engraved designs, too.

After Jiro Kinjo passed away, some his children and other members of the family continued Kinjo’s works and his specialty. The family group is now called with a common name Kinjo Ichimon (Kinjo Family). 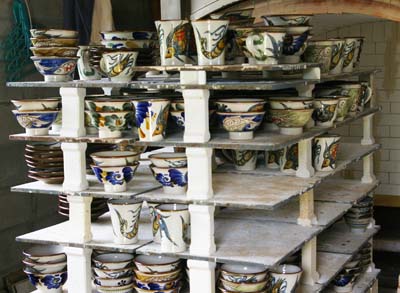 Hideyoshi Kinjo would like people to put his pottery to everyday use.

One of the members is Hideyoshi Kinjo who’s a grandchild of Jiro’s brother. He also has his own studio “Hide Toubou” in Nanjo City, where he produces pottery every day. His works of course reflect Jiro’s style, to which he adds his own passion about his work. His pottery features powerful sea waves, and using strong shining red color he has created his very own style. Kinjo says, “People usually think our works should be for interior decoration, but I wish people would also use them in their everyday life as actual tableware. I believe my work could inspire conversation and happy gatherings at a family table. My great uncle Jiro Kinjo was a very famous and great person, and I keep trying to create new works based on his traditional style.”

Hideyoshi Kinjo will hold an exhibition of his contemporary works from July 25 through Aug. 1st at the 7th floor art salon in Ryubo Department Store. The exhibition is open daily from 10:00 to 21:00, except on the final day it closes at 17:00. Kinjo himself is present during the exhibition, where his works are also on sale. Of course, they can be seen and bought at his studio in Nanjo, but the studio is located in the countryside and not especially easy to find.

He strongly recommends people to visit the exhibition at Ryubo in Naha, at 1-1-1 Kumoji, Naha City. Studio Hide Toubou is located at 367-3 Shikenbaru, Tamagusuku, Nanjo City.  Email is yachimun@jade.plala.or.jp The studio is open daily 09:00 – 18:00.