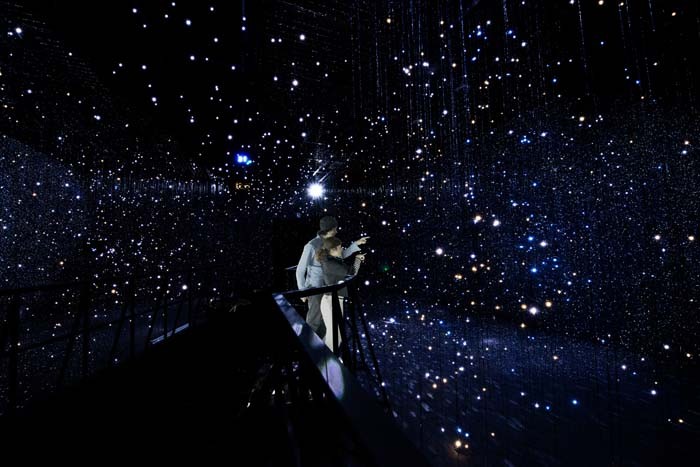 The 3D effect of the planetarium brings the stars almost close enough to touch.

Sky Walk, ‘Uchu Sanpo’ is a project presented by The Ryukyu Shimpo newspaper and co-sponsored by the Urasoe City Board of Education at Urasoe City Art Museum. The project runs form July 23rd through Aug. 28th for the first time in Okinawa. 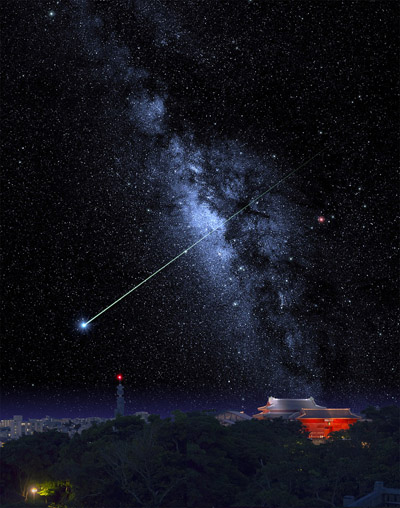 The night sky above Shuri Castle as created by the Megastar projector is nothing short of impressive.

The project features “Planetarium Megastar” that was recorded in the Guinness Book of World Records as the “most advanced Planetarium Projector” in 2011, and its creator Takayuki Ohira.

Ohira was born in Kawasaki near Tokyo in 1970 and has been interested in the night sky and planetariums all his life, building his first desktop pinhole planetarium at the age of 10. Planetariums made by his company Ohira Tech have been installed in every corner of the world with the newest models able to project up to 22 million stars.

The Sky Walk exhibition theme is “Fantasy Universe Okinawa Night” presented with Ohira’s newest version of the 3D Sky Walk that brings the stars in the night sky so close that one almost feels like they are within an arm-length to be touched.

The “Fantasy Universe” exhibition was a success in Tokyo in 2014, and the same excitement will be no doubt on display at the Urasoe City Art Museum.

The Megastar projector can create images of up to 22 million stars and other heavenly images including Nordic Lights.

Tickets to the Sky Walk exhibition are ¥1,000 for adults and ¥600 for elementary and junior high school students in advance. Add ¥200 at door ticket each. Preschool age children are free.

Japan Update has two pairs of free tickets to raffle away. E-mail us at info@japanupdate.com or send a message on facebook.