Sound frequencies in music heal our bodies and minds 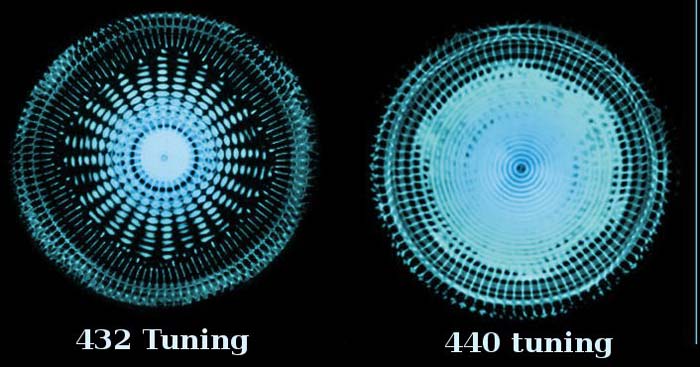 A picture of sound waves in water shows the clear difference between frequencies.

Our bodies and minds are extremely sensitive to a wide range of frequencies in music and sounds in our environment. Test this out by putting on a music selection that you most enjoy and check in with your mood. It’s very likely that your mood is elevated, and you notice a bit more bounce to your step.

Specific brainwave states can be tapped into to affect our mood, health and healing. Frequencies occur in a range of wavelengths that include Beta, Alpha, Theta, and Delta. Each of these frequencies affects us in a specific manner. For instance, it has been proven that the Theta sound frequency inspires fantasy, imagery and creativity while the Alpha frequency can invoke relaxation, tranquility and inward awareness. 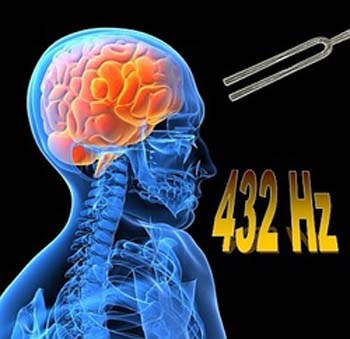 432Hz has been proven to be in harmony with a human physiology.

Sound frequencies in music can also affect our hormones and are capable of triggering a release of endorphins, which act as our feel good chemicals that relieve stress and strengthen our immune system. If you are skeptical of the validity of these theories, consider the scientific evidence that supports them. Probably the most famous experiment that proves the effect sound frequencies have on endorphin release was performed at the University of California at Irvine. College students were assigned to three different groups. The first group listened to Mozart’s sonata for Two Pianos in D Major. The second group listened to a relaxation tape. The third group listened to nothing at all. Before and after listening, they took a Stanford-Binet reasoning test. The results were clear — those who had listened to Mozart improved their test scores substantially.

Such results give strength to the Hz tuning theory that claims that certain frequencies are mathematically consistent with the frequencies of our universe. The magical Hertz tuning number is 432Hz. The standard pitch (A=440Hz) does not harmonize on a level that corresponds to cosmic movement, rhythm, or natural vibration the way that it does at 432Hz. The music transmission at 432Hz is said to provide greater sound clarity and is ‘easier’ on the ears. Many people experience more meditative and relaxing states of body and mind when listening to music transmitted at this frequency.

If you consider the Hz tuning theory using the Buddhist or Hindu Chakra philosophies, the 432 Hz works at the Heart Chakra, where love, warmth, compassion and joy are located. It is claimed that these sound waves have a strong positive influence on the mental and spiritual health of the listener. Some individuals are not able to distinguish the 8Hz difference in frequency but have claimed that the music actually feels warmer which would be due to the longer wavelength of these sounds.

According to Amanda Bosman, an international researcher and musician, the earliest evidence of the 432Hz were discovered in unearthed archaic Egyptian instruments that had been tuned to A=432 Hz. Most instruments of ancient Greeks were also tuned at 432Hz. In the Greek Eleusinian Mythology, Orpheus is the god of music, death and rebirth, and was the keeper of the Ambrosia and the music of transformation. His instruments were all tuned at 432Hz.

At this point, you are probably wondering how to intentionally seek out and distinguish 432 Hz sound frequencies when you are feeling a need for their healing properties in your music. Fortunately, people have had an awareness if this ‘right-brain’ tuning of music for long enough that many curious and talented musicians have experimented with the theory by creating music using the 432Hz. Two of these artists are Bob Marley and John Lennon. To find out which songs or other artists have experimented with their music, a simple Youtube search will bring up a multitude of to choose from. Another option would be to use a program like Audacity, which can be downloaded for free on both Mac and PC, to convert music recorded at 440Hz to 432Hz.

With increased knowledge of the potential healing properties of sound waves, you are now challenged to go forth and tap into the creative inner workings of your right brain or to start healing your spirit through music played at 432Hz. Many who have gone before us have taken advantage of the benefits of the musical pitch that is connected to the universal properties of the Golden Ratio; the numbers by which all natural creation is based and most of civilizations great architectural structures, such as the Egyptian pyramids, have been created. Unite yourself with the universal properties of light, time, space, gravity, biology and consciousness and repair yourself on a cellular level by simply listening to ‘Imagine’ by John Lennon.