Everyone knows that music and Okinawa go hand in hand, and that is especially true about Okinawa City. The point is that the genres that first come to mind are Okinawan Rock and Ryukyu sanshin and jazz.

But far fewer have heard of Okinawa blue grass music. Turns out that the genre is alive and well, and organizers of the 1st Okinawa Bluegrass Music Day scheduled for Oct. 30 at Koza Music Town have decided that it’s the time to bring the banjos and fiddles out of the shadows.
The all day event features six groups, two of them visiting from Hokkaido, and four are local Okinawan performers. The event starts at 12:00 and runs through 21:00. Admission to the event is free. Below is a list of performers.

Hokkaido Dairy Gakuen University Bluegrass Group relies on “girl power” among Hokkaido bluegrass fans.
Ryukyu University has a bluegrass music club and the club naturally has its own band. Although the club was established decades ago, it has been dormant, and has not had a band in 40 years. The band was re-established at the start of this school year in April. All members are freshmen, and they have played their instruments for 4 to 5 months.

Ginowan Countries is an Okinawan band whose members are fans of “Jerry Garcia”, so their original blue grass style songs are mixed with his songs.

Hokkaido Dairy Gakuen University Bluegrass YUKI’S is another group from the farming and agriculture university in the northern Japan. This bluegrass band also relies much on female players. 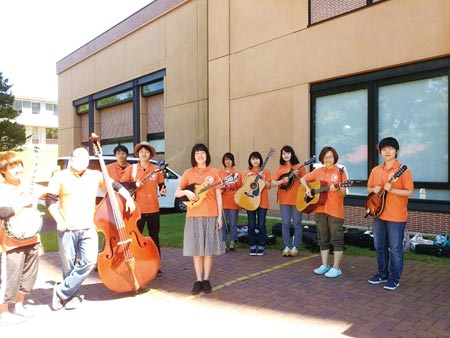 Ryukyu Islanders is a group led by Kitajyo who came from Osaka after falling in love with Okinawa. The band specializes in old bluegrass music.

Sunny Side Boys is the oldest bluegrass band on Okinawa, and recently come back to play. A young banjo player is behind the revival of the group. Their avowed goal is to play hardcore bluegrass music and make it popular on the island.

The event venue is on the first floor open café area of the Koza Music Town Sound Market at 1-1-1, Uechi, Okinawa City. Admission to the event is free, and it’s scheduled to go ahead rain or shine.