Okinawa Soba has its special day on Oct. 17 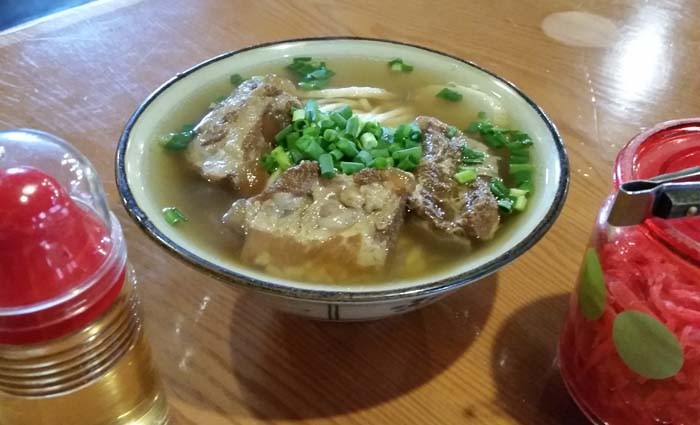 Everyone who has lived any length of time in Okinawa has his or her favorite soba joint.

A bowl of soba is to an Okinawa resident what a hamburger is to an American, fast food that about everyone craves for at least once a week. Those, who are new to the island will inevitably become introduced to this dish that is as much a part of the island’s culture as eisa or awamori.

Oct. 17 has been an official “Soba Day” since 1978, when the Japanese Fair Trade Commission decided to admit that the noodles everyone in this prefecture eats can be called “Okinawa soba.” The problem was that “soba” in mainland Japan, was an entirely different food. Soba in mainland Japan is made with buckwheat flour called “Sobako”, but Okinawa soba does not include any buckwheat and is made of flour, and thus could not be called “soba” under the Japanese technical definition.

The wheat noodles in Okinawa soba resemble udon, while the soup is like in ramen. The noodles differ sightly depending on the region. For example, in the Yaeyama Islands the noodles are circular, while elsewhere in Okinawa they are slightly flat. The noodles are served in a broth flavored with konbu seaweed, and katsuobushi bonito flakes, pork and chicken. Standard toppings are kamaboko fish cake, chopped scallions and a thick slice of stewed pork belly or pork ribs. Pickled ginger is usually provided as garnish and a few drops of togarashi, awamori spiced with hot peppers, gives it a nice zing.

The origin of Okinawa soba dates to the 1800’s, when a Chinese cook opened “Shina Soba” restaurant in Naha. With time, the dish he served became Okinawan soba that is more like ramen than soba in Japan.

Following the reversion of Okinawa to mainland Japan, the organization governing fair trade claims stirred things up because according to their rules Okinawa soba could not be sold as soba because it was not made of soba buckwheat. The trade people noted soba is defined to include at least 30% buckwheat. After lengthy negotiations, the Japanese government finally agreed to call or write it “Okinawa soba” as a special name, and not only soba. And then Okinawa soba was finally, officially endorsed.

Today, there are more than 2,000 restaurants serving Okinawa soba. It’s one of the most popular foods in Okinawa, and almost everyone who lives here has his or her favorite soba joint.

For this year Soba Day, 20 member shops of Okinawa Fresh Noodle Cooperative Association are organizing a stamp rally. The campaign lasts through Feb. 28th next year, and anyone ordering a soba in particpating will get a stamp. Anyone collecting 20 stamps will get a certificate that pronounces him or her an “Okinawa Soba Jyo-gu” or “Okinawa Soba Lover.”