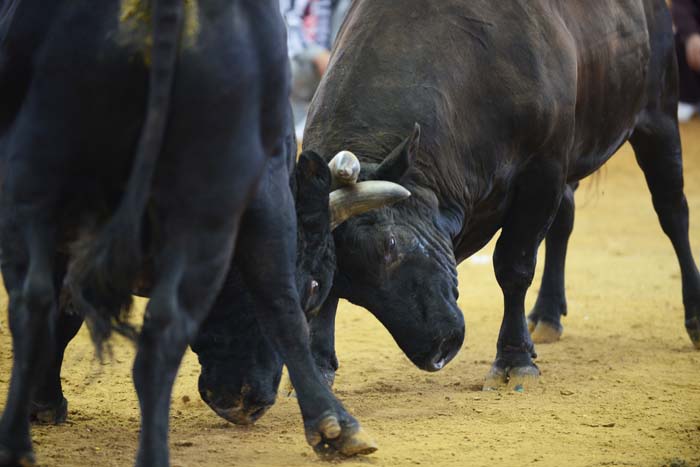 Muscle power is in demand when bulls fight for theAutumn Tournament title.

Those who enjoy watching Okinawan style bullfighting will head for Ishikawa Multipurpose Dome in Uruma City on Sunday, Nov. 13, where the 26 strongest bulls from the island and elsewhere will take measure of each other in the 106th Autumn All Okinawa Island Bullfight Contest 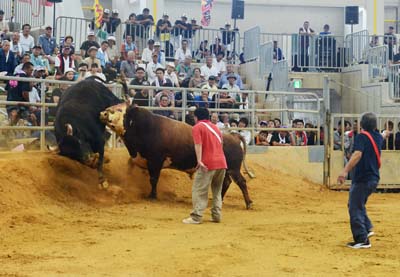 The one who turns tail first is the loser.

The matches begin at noon, and during the day 26 bulls will face each other in 13 matches. As usual, the bulls are divided in red and white teams and the fighters everyone keeps an eye on most are a Team Red contestant from Iwate Prefecture that weighs 1,050 kg (2,314 lbs) and has won 11 times in its career and lost only once. He will face an Okinawan contestant from Team White weighing 1,000kg (2,204 lbs) and has won all eight of his matches.

In the light weight category, Team Red representative weighs 820kg (1,807 lbs) and has 13 wins against one loss. Team White fighter weighs 830kg (1,829 lbs) and has won all of his four matches. Both are from Yonaguni Island.

Tickets are available only at door on the day of the fights.

In Okinawan bullfights no one gets killed and even injuries are rare.