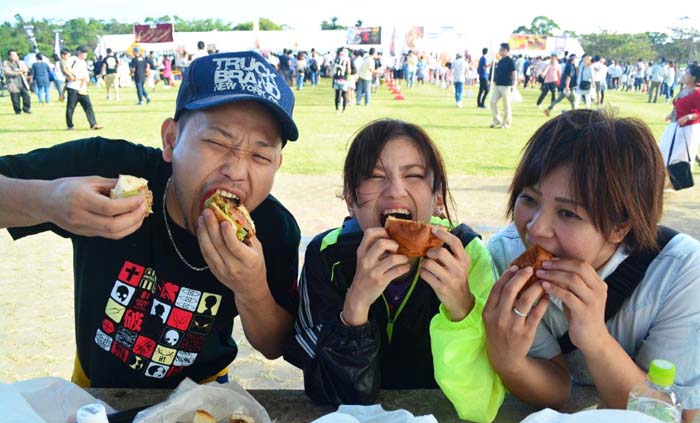 Selecting the ‘Best Burger on Okinawa’ is serious business in Ginoza this Sunday.

Ginoza Village on the northern east coast of Okinawa is perhaps best known for the annual February spring training camp that the little hamlet hosts for the Hanshin Tigers Japanese pro-baseball team. It’s also known for its very active cultural program, mostly for the concerts in the Garaman Hall at the Ginoza Culture Center.

Over the past few years it has also gained fame and popularity for an annual Burger Festival that attracts almost 10,000 people to sample and vote for the ‘Best Burger on Okinawa.” And with the crowds, a growing number of burger joints from all over the island are coming to cook their best creations for the public to judge. 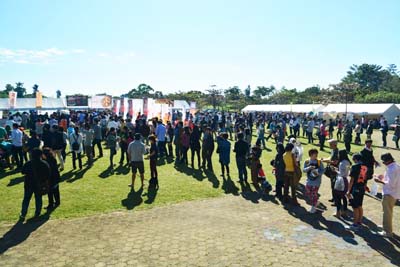 About 10,000 people are expected to come to select Okinawa’s championship burger.

Twelve restaurants, including last year’s champion 3S Café from Kadena, take part in the event preparing their best burgers for visitors to judge.

To take part in judging, visitors must buy a book of 10 tickets costing ¥1,000. The tickets are used to pay for the burgers, and are valid only at the festival on the festival day. Organizers advise people to cut the burgers into half and share in order to be able to taste of as many burgers as possible. Each time you buy a burger, you will get a marble from the shop, and if you think the taste is right, drop the marble in a box at the front office.

At the end of the day the marbles are tallied up, and the shop that has most marbles in the box is declared having the honor of making “The Best Burger on Okinawa.” The winner is announced on stage at 16:30.

Organizers advise people to bring tissue paper to wipe their mouths, as no one can eat a burger perfectly, and the affair might turn messy. The number of tables and chairs is limited, so bringing a picnic sheet could be a good idea.

A classic car and custom motorcycle show is also organized on the sidelines of the Burger Fest at the same venue.