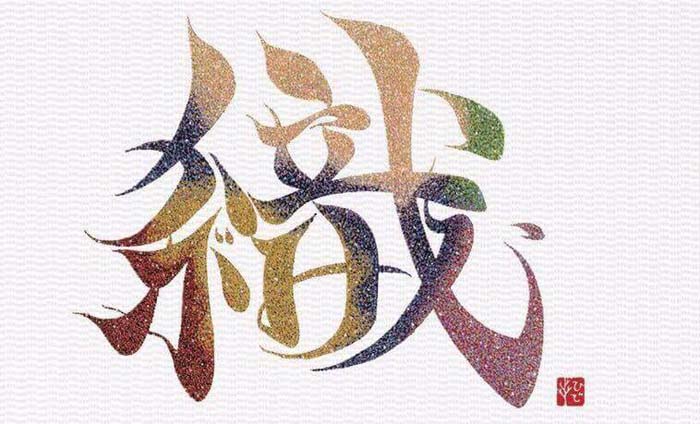 The kanji character above, “oru,” meaning “weave,” was created as a symbol of Ashikaga, a city that has a long tradition in textiles. This kokoromoji the character is composed of seven hiragana characters – カ，が、や，く、み、ら、い (kagayaku mirai) that means “spakling future,” which is what the city aims to.

An unusual art exhibition called “Kokoro Moji” (characters of heart) will be held at Ayakari-no Mori in Kitanakagusuku near Costa Vista Hotel, this weekend.

Kokoro Moji is a special form of art that presents artistically drawn kanji characters that are composed of hiragana characters that together form a meaning, which in turn is related to the kanji.

English subtitles explaining each work are listed at the Kokoro Moji exhibition. 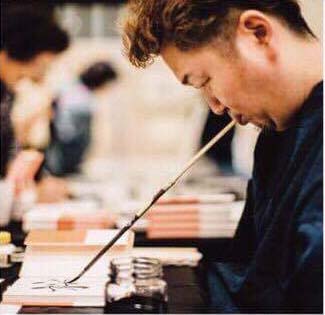 The artist whose Kokoro Moji works are on exhibition is Hideki Urakami. He was born Feb. 9, 1973 in Ageo, Saitama Prefecture, and now resides in Kasukabe, in the same prefecture.

In 1993, at the age of 21, he was diagnosed with distal myopathy, a.k.a. distal muscular dystrophy, a disease characterized by progressive wasting of distal muscles. Although he retains feeling throughout his body, he has little or no ability to move his arms or legs, or any other parts of the body requiring muscle action. In 2010 he began working as a Kokoro Moji (heart characters) artist, holding a brush in his mouth to create his unique works of graphic design art.

In 2013, his works were exhibited at a Cherry blossom festival at Vancouver in Canada, where he also demonstrated his working techniques for the first time in front of an audience that had a big impact on people watching. Since then, he has had exhibitions throughout Japan.

The Kokoro Moji art exhibition will be held at Ayakarino Mori in Kitanakagusuku Village near Costa Vista Hotel on Saturday, Dec. 3, from 14:00-18:00, and at Curt Conrad House at 708 Esu, Uruma City, on Sunday, Dec. 4, from 12:00-17:00. Urakami will give a demonstration of his work on both days.