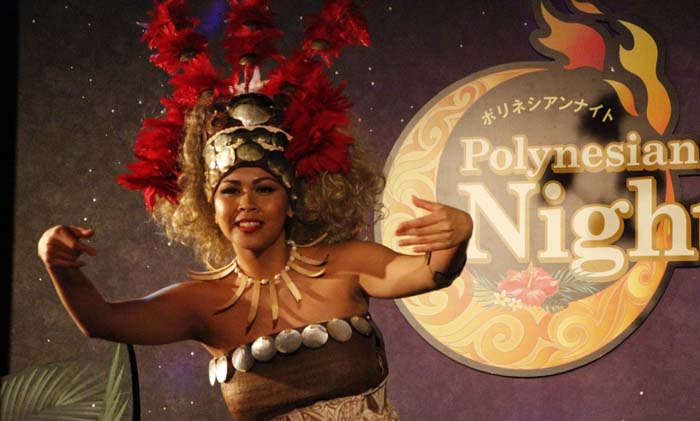 The 40-minute show takes the audience to various regions throughout Polynesia.

Polynesia, a region consisting of over 1,000 islands scattered over the vast regions of the central and southern Pacific Ocean, has always been considered something of a paradise on the earth, a place where life is easy as palms sway in gentle winds and exotic people feast on the beach with a huge full moon hanging overhead. 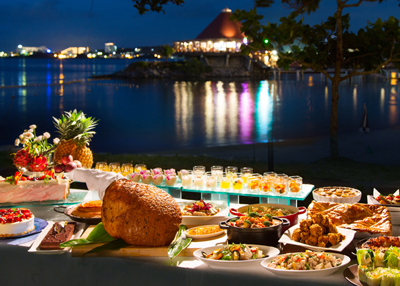 The buffet has more variety than most people can sample even on two meals.

The Renaissance Okinawa Resort is now presenting a twice a night show called Polynesian Night in its Sailfish Café on the first floor of the hotel that showcases the dances and rituals of Hawaii, Tahiti and other Polynesian islands. The first show starts at 18:00 and the second at 20:00 and both last about 30 to 40 minutes. The show will go on through the end of March.

The show itself is entertaining with performers going through their numbers professionally and obviously with plenty of practice put into their routines. The group consists of performers from Hawaii added with a few from Okinawa, but you would not know who is from where. Whether it’s a Tahitian dance on stage, Hawaiian hula performance or a fire dancer, everything is well practiced and a joy to watch. 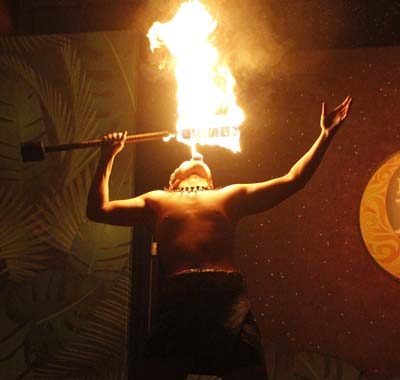 Fire dance is one of the most impressive parts of the show.

After the show the troupe offers the audience a chance to take some pictures together for lasting memories.

The price includes a buffet style dinner that includes fish and seafood dishes of every imaginable kind, Hawaiian style pork and a vast array of sweets and desserts to top the meal off. The selection of food is so big that it’s unlikely that anyone can taste everything even over two meals. And it’s also tasty.

Renaissance Resort is located on Highway 58 at Yamada, about 20-minute drive north from Kadena Circle. The hotel has free parking for customers across the street from the hotel.