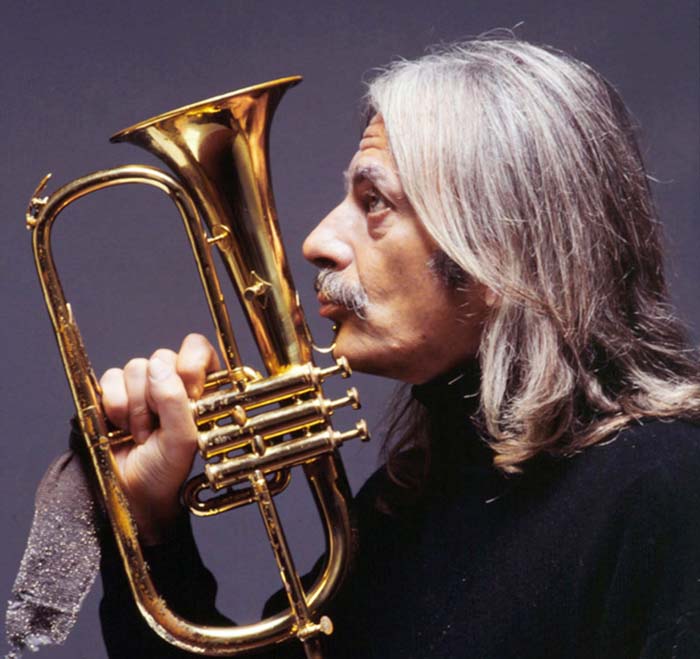 Over the past few years Ginoza Garaman Hall has gained a reputation of being a venue for outstanding music performances, mostly for jazz and classical concerts but also for other genres, often inviting performers who are seldom heard of at other venues on Okinawa.

Enrico Rava was born Trieste, Italy, in 1939. His first instrument was trombone, but after he listened the performance of Miles Davis he began to play trumpet that has become his main instrument. He moved to New York in 1960, and from 1970 to 1980, he played with musicians like Pat Metheny, Miroslav Vitouš, Gil Evans, and Cecil Taylor. His newest album is titled “Wild Dance”.

Rava takes the stage with three special guests. Makiko Hirabayashi, a pianist currently residing in Denmark. Born Tokyo in 1966, she started playing piano when she was four years old and violin when she was nine. She performed in a jazz – sculpture collaboration event at Garaman Hall a year ago.

Seigo Matsunaga was born 1984 in Fukuoka. He plays contrabass and works as producer. He played at Garaman Hall in October 2014 with a multi-cultural quartet a.s.k.

Admission is ¥4,000 in advance and ¥4,500 at door. Children up to student age get in for free but need a numbered reservation ticket. Ginoza residents can buy a ¥3,500 discount ticket. Children under age 3 are not allowed.

Advance tickets are available at Garaman Hall website (Japanese), by calling 098-983-2613 (24 hours a day) of by email. ticket@ginoza-bunka.jp

Please don’t forget write your name, phone number, name of the concert, and how many tickets you need when making a reservation. Advance tickets are available until midnight on the day before the concert.