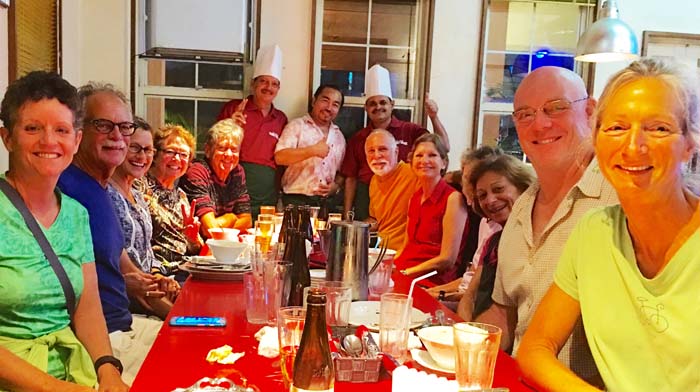 K’s Diner Owner Tamang Amrit (middle back) attracts customers with the party atmosphere of his diner that is like no other Indian restaurant.

Hardly a week goes by without a new Indian curry restaurant opening somewhere on the island. One of the newest of the genre is K’s Diner Curry House in Hamby near Araha Beach that aims to attract diners to have a party singing karaoke and even listening to a live band that will appear on stage to entertain at parties after 20:00 by advance request. 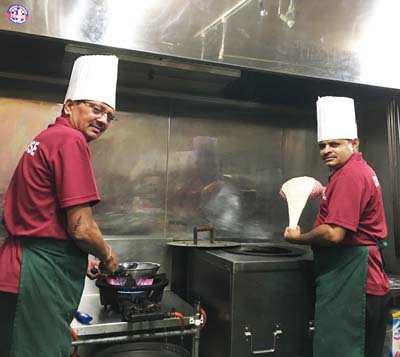 Open since the end of June, K’s Diner Curry House serves reasonably priced meals. The lunch sets start from ¥750 and include curry, nan or rice, and salad. The dinner sets start from ¥1,500, and kids’ sets from ¥650. The restaurant uses original spices from Tokyo in all of their curries.

Owner Tamang Amrit is from Nepal and worked in Tokyo for 10 years, and says just by chance he found the best Indian curry restaurant he had ever tried in his life. Two Indian chefs, Sing Satpal and Sweety Sodhi, were the force in its kitchen, and eventually Amrit befriended the two and told them about his future dream, “I love your cooking. Please come to work in my restaurant when I open my business.” Now they are creating their wonders a K’s Diner Curry House. 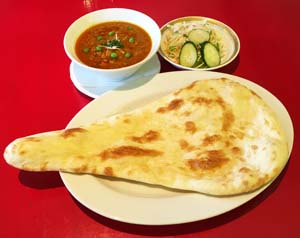 A basic lunch consists of a curry, salad and nan.

Amrit says “I love curry and went to many places in Tokyo, however, it took a while before finding what I’d call the best curry restaurant in my life. When I finally visited that restaurant, I instantly fell love with their cooking. I fell so lucky to have found the best chefs to join me to start to my business.”

The two chefs had worked in restaurants in India for 20 years. Both eventually ended up in Tokyo where they met Amrit and decided to join him to start business in Okinawa.

Asked why in Okinawa, and the answer is simple, 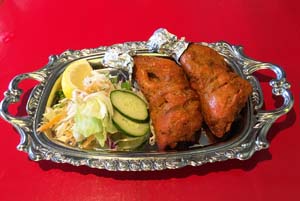 Chicken tikka is a nice add on if the basic meal is not enough.

“Because the island is beautiful and people are nice.”

K’s Diner Curry House party plans are good for ‘shinenkai,’ traditional new year beginning parties or other gatherings. The restaurant has party plans starting from ¥3,000 per person that includes four kinds of curry, nan, rice, tandoori chicken, salad, dessert and more. Soft drinks and alcohol are included. A reservation for the party should be made two or three days in advance by calling 098-936-8878.

K’s Diner Curry House gives a free soft drink, chicken tikka or samosa if you tell them you saw this story in Japan Update.

Business hours at the restaurant are lunch 11:00 to 15:00 and dinner 15:00 to 22:30. It’s open seven days a week. K’s Diner Curry House can be found on Tabelog or facebook by searching K’s Diner. They are located in Hamby. They are also on facebook.