The habu is a venomous snake found throughout islands of Okinawa Prefecture and other remote islands in the Amami archipelago to the north of Okinawa.

The background on how the habu come to inhabit where it does is quite interesting and unique. Habu inhabit a number of islands throughout the Okinawa archipelago. Yet, surprisingly, although the habu can be found in abundance on one island, it is nonexistent on a neighboring island. For example, while the habu is common on Ishigaki and other islands in the Yaeyama chain, it is not found on nearby Miyako. Similarly, habu inhabit Tokashiki Island but not neighboring Zamami.

Typically, habu inhabit larger volcanic islands that sit much higher above sea level and not smaller, coral islands with lower elevations. In ancient times when sea levels were much lower, nearly all of the islands that make up the Okinawa archipelago were part of large, interconnected landmass inhabited by habu. Over time, sea levels raised, flooding the landmass, creating an archipelago and killing off a number of species. Habu, although unable to cross the ocean, survived and were able to thrive on those islands with higher elevations and adequate food sources.

In Okinawa, it is common knowledge that habu venom is quite strong and potent enough to kill humans. Habu are nocturnal creatures and are most active during the warmer summer months. Typically, habu can be found in the deep forest and sugar cane fields, although it’s not uncommon to find them in tombs, hiding in rock walls or even inside homes where they venture in search of mice and rats. Although habu are less active during the winter, they do not hibernate and still pose a threat. 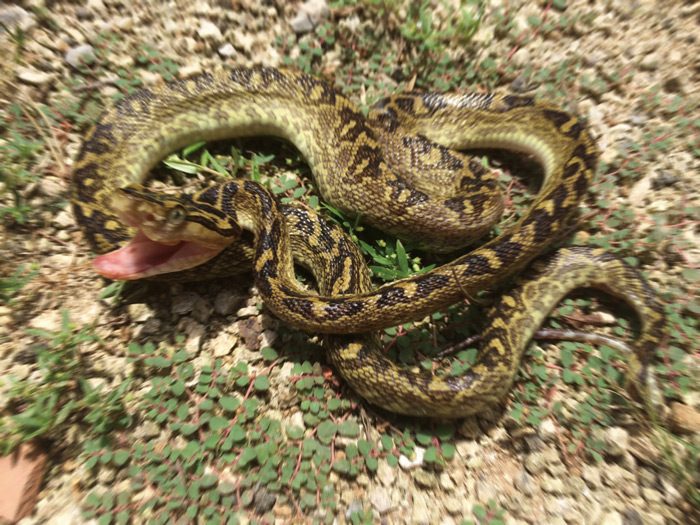 Habu are notoriously territorial, irritable and can strike quickly with a long reach. If you happen to stumble upon a habu, do not attempt to touch or intimidate them in anyway. It’s best to maintain a safe distance and call the police or city office. In 2016 alone, there were 622 calls for assistance in removing habu.

Although habu are generally loathed by locals, historically the serpent was revered as a god-like symbol with the power to bring happiness and riches. Of course, this tradition has carried over to modern times as many Okinawans believe in the medicinal properties of habu sake, a locally produced alcohol that contains a dead habu inside the bottle.

Wild habu are dangerous and should not be taken lightly. Yet, they are native species of Okinawa and thus should be given due respect. When exploring Okinawa, and particularly when venturing into Okinawa’s lush, tropical forests, take care to wear proper protective clothing and be on the lookout for any danger lurking in the bush.

Health care technology has developed an effective anti-venom so it has become increasingly rare that people die from a habu bite. However, if not given immediate medical attention, the bite can prove fatal. If bitten, seek medical attention immediately by calling 119/110 (off-base) or 911 (on-base).