The Origins of Okinawan Tombs

One of my earliest memories of Okinawa after arriving over 20 years ago was the awe-inspiring sight of large, concrete tombs that dot the island landscape. Many of them built centuries ago, Okinawan tombs are often located in what today might seem rather random, odd places, whether it be behind a supermarket, adjacent to a major roadway, or in someone’s backyard. For anyone visiting Okinawa for the first time, these tombs—called haka in Japanese—are undoubtedly a sight to behold as such uniquely designed and relatively large tombs are not found anywhere else in the world.

The origins of Okinawan haka can be traced back to ancient China and the coastal province of Fujian, an area of southern China that had the most frequent contact with merchants from the independent Ryukyu Kingdom, and thus are a constant reminder of the massive cultural influence China had on Okinawa. Aside from a relatively minor Buddhist influence, Okinawan culture is essentially void of any major religious practice. Consequently, haka also highlight the influence that Chinese ancestor-worship and rites of interment had on the development of spirituality and indigenous religious practices during the early days of the Ryukyu Kingdom.

There are two types of haka that are common on Okinawa: the older gable, “house style” (ie-gata) and the rounded, turtleback tomb, which became more commonplace around 17th and 18th centuries after being introduced from Fujian. The design of the structures, particularly the turtleback variety, are intended to convey the image of a woman’s womb from which all human life must come. After death, souls are interred in the tombs according the Buddhist philosophy of returning the dead to the source.

During the age of the Ryukyu Kingdom only royalty, court aristocracy and the extremely wealthy among the upper classes could afford to build large, lavish tombs. Family resources were often drained in the construction and ongoing maintenance of such elaborate burial spaces. Commoners and peasants couldn’t afford extravagant, handsome burial plots so internment in the earth was adequate. Yet, even such modest burial grounds were places for family to gather and honor the dead on festive occasions. 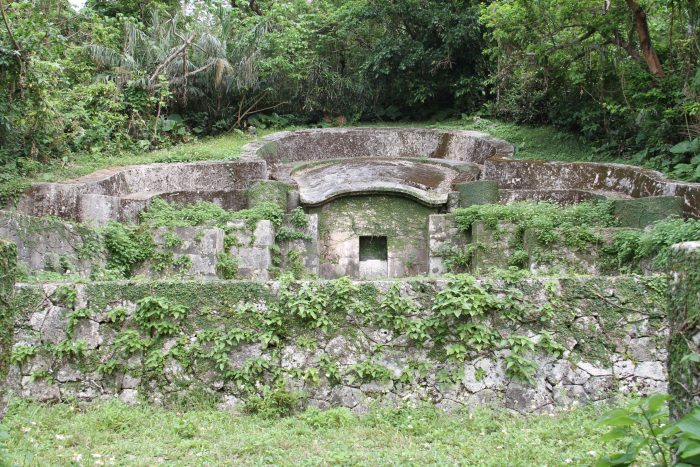 In the pre-modern era, haka were typically built from coral blocks and cemented with a natural lime stucco. A large, empty space in front of the tomb was added to provide an area for family to gather and honor the spirits of ancestors with picnics and feasts held during sacred times of the year such as shiimi and obon. Such gatherings are a sacred, time-honored tradition that continues to this day.

Modern day Okinawans have all but done away with newly constructed turtleback tombs due to the limited space and the overcrowding of the island. Instead, haka are often pre-constructed and come in a variety of designs, which is also somewhat symptomatic of the modern consumer culture. Nevertheless, tombs, or haka, on Okinawa have a long, storied tradition and hold an extremely sacred place in Okinawan culture, from ancient times to the modern day.