Introducing popular plays with audio guidance in English, Chinese, Korean, and Japanese languages so that foreign visitors can casually enjoy the aesthetic beauty of Kumiodori, which has an approximately 300-year history.The Kumiodori is a unique Okinawan theatrical art based on traditional Okinawan music and dance. The storyline of a play unfolds mainly through actors’ lines, along with singing and dancing. In 2010, it was inscribed on the UNESCO Representative List of the Intangible Cultural Heritage of Humanity. Please fully enjoy this world-class traditional Okinawan performing art.

Part I  ”How to Enjoy Kumiodori”

Kumiodori actors will guide you through the history of “Kumiodori” and explain its uniqueness and attractiveness. The audience can also experience Kumiodori by taking part in it.

A piece based on the local historical legend, the“Gosamaru-Amawari Revolt” in 1458. A story of two orphans who avenge their father, Gosamaru, the former Loyal Retainer of the administration of the Ryukyu Kingdom and kill their father’s enemy Aji of Katsuren, Amawari. It is the first piece played in the history of Kumiodori. 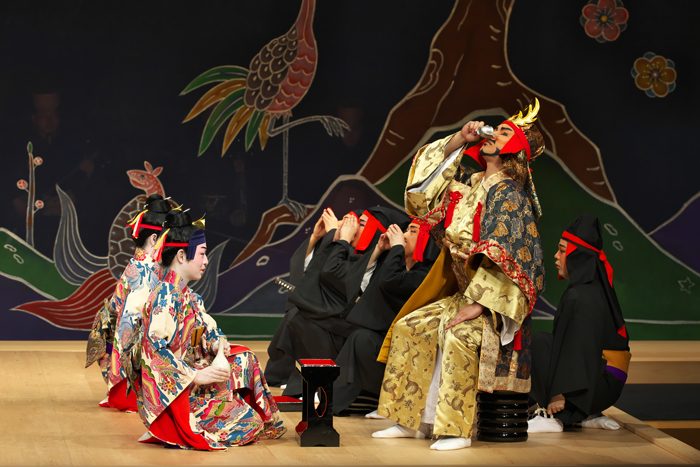 Amawari, lord of Katsuren Castle, destroys Gosamaru, lord of Nakagusuku Castle, whom he considered a nuisance, by branding him as a rebel. Thinking that he killed every single member of his enemy clan, Amawari feels completely safe, but Gosamaru’s two sons (Tsurumatsu, the older brother, and Kamechiyo, the younger brother) had managed to escape during Amawari’s assault on Nakagusuku Castle. Learning that Amawari was planning to hold a mo-ashibi (party where young people would go out to sing, dance, and drink), the two brothers ask their mother’s permission to avenge their father’s death. She hands them a short sword, a memento of their father, and sends them off, holding back her painful feelings. Disguised as traveling entertainers, Tsurumatsu and Kamechiyo approach Amawari, who is in the midst of a drinking party with his subjects. After performing in front of Amawari, the brothers manage to get him drunk by serving him sake and wait for the chance to seek revenge. They finally succeed in avenging their father Gosamaru’s death. 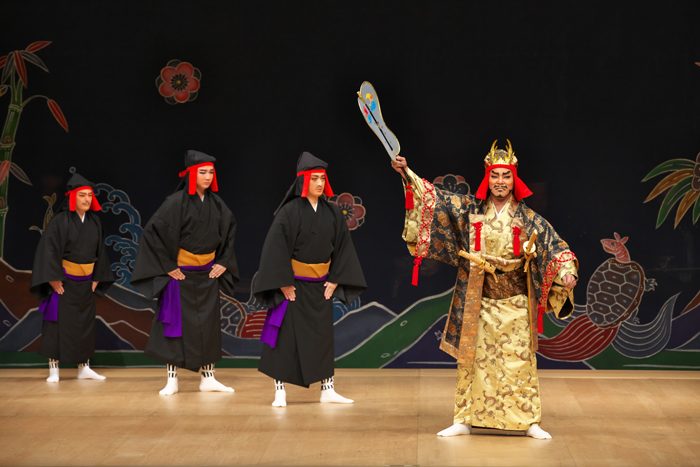