Okinawa Index, a small local advertising and publishing company, has recently published a new edition of their guide book titled “Okinawa Island Guide.” Its newest 188-page version is vastly expanded from the book’s earlier editions, and now aims to present a comprehensive picture of Okinawa, ranging from its history, culture and traditions to the extensive array of cuisine, restaurants and nightlife, without forgetting the miles of white beaches, and incredible nature both on land and in the sea. 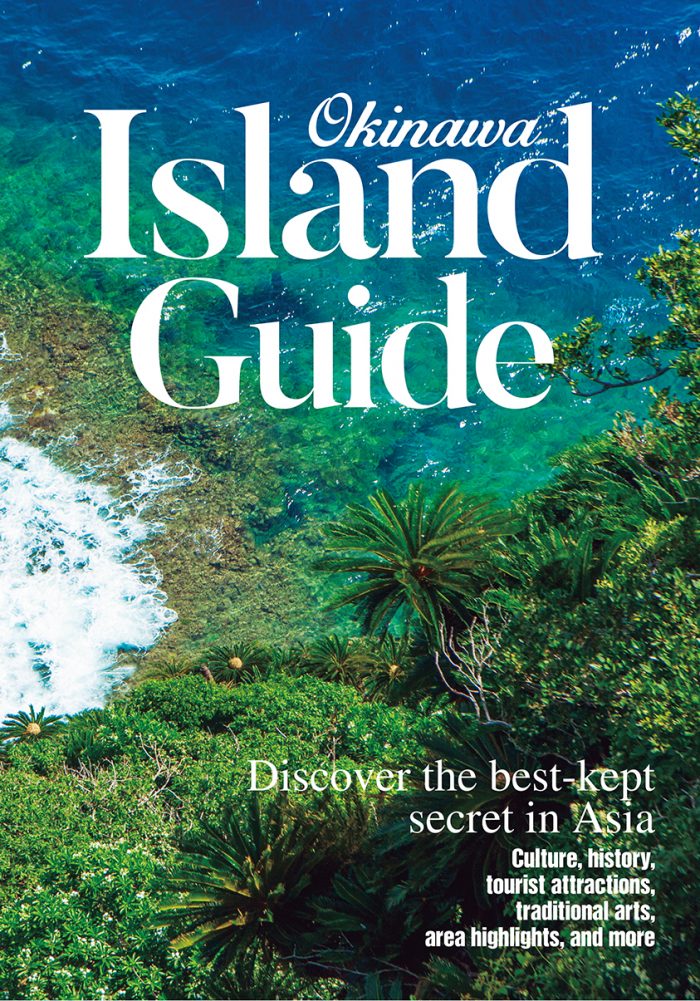 “Planning this edition, we decided to put an extra emphasis on describing the historical, cultural and spiritual aspects of Okinawa to convey a deeper image of the island to readers,” says Chika Kobayashi, the editor of the book. “We wanted to show that there is much more to Okinawa than just world-class beaches to soak up the sun and eat out and party, although we did not neglect that part, either,” she says.

The first part of the book covers the culture, history, and traditional arts in different areas of the island, including spiritual rituals and festivals, such as tug-of-wars (tsunahiki) and ungami, festivals to honor the gods of the sea. The Ryukyu Kingdom, the independent kingdom that became Okinawa Prefecture, is covered with an interview of the daughter of the 22nd head of the Sho Dynasty that ruled the kingdom for 450 years before it was taken over by Japan and became one of its prefectures. The northern part of the island, an area of lush nature and wilderness that is very different from the urbanized southern part, is covered in a separate section. Interviews of masters of local arts are included in the section dealing with local arts such as bingata dyes, pottery and glassware. 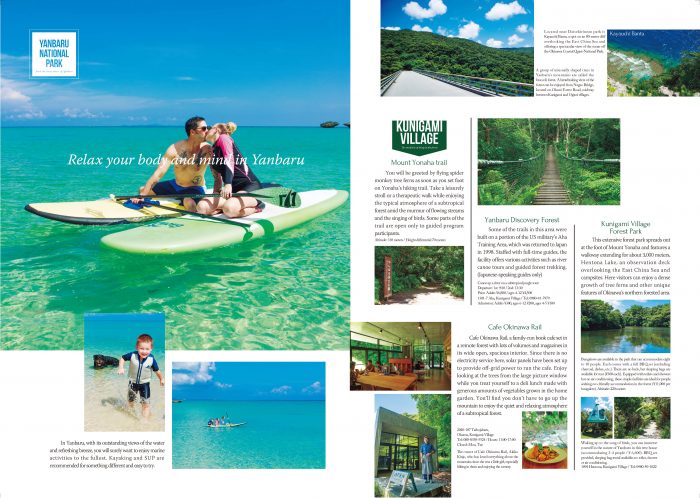 Okinawa is a prefecture that has sent emigrants all over the world, more than any other prefecture in Japan, with some 450,000 people on every continent recognizing themselves as “Uchinanchu” or people of Okinawan descent. Every five years, there is a huge gathering in Okinawa called the Worldwide Uchinanchu Festival that attracts thousands of them back to their ancestral land to celebrate their heritage, and the book presents a colorful collage of the last festival that took place in 2016.

Another section is dedicated to karate, which was born in Okinawa and will be one of the new sports at the 2020 Tokyo Olympics.
The rest of the book describes attractions in the major cities of Okinawa, places to go and see and things to do. Chatan’s American Village gets an extensive coverage as the newest tourist attraction that offers myriads of restaurants and shopping venues, popular with both visitors and locals alike. 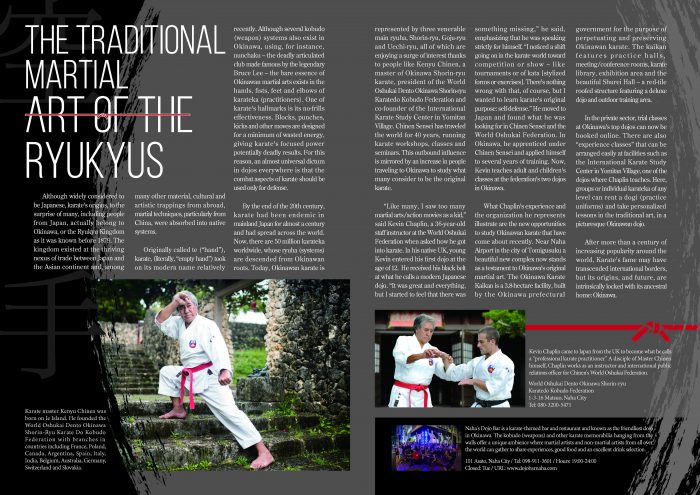 Every section and article in the book is illustrated with plenty of excellent photographs that convey the essence of each subject, and perfectly captures the atmosphere of this island of leisure and happiness.
Although the book declares on its cover that Okinawa is “the best kept secret in Asia,” the ever-increasing number of visitors seem to be discovering the secret. Almost 9.5 million visitors came to see the wonders of Okinawa in 2017.

The Okinawa Island Guide is available at bookstores in Okinawa, online at Amazon (US and Japan), and at Okinawa Index Office at 11-2 Minato, Chatan Town, Okinawa. Telephone: 098-921-7593. This collection of beautiful photos and articles will be a great keepsake from Okinawa, and would make a great gift for family and friends. The book is available for ¥1,800 (plus tax).