Traditional sweets in Okinawa, its since the Ryukyu Era

Though Okinawa is part of Japan, the island has had many influences from China, as well as from other cultures from around the world. One of those influences came in the form of sweet edibles. This influence occurred during the era of the Ryukyu Kingdom. At that time, only people with high status could access such delicious pastries. Over time, this had spread to the local populace and can be found in local markets, and even served at Buddhist memorial services to this day. 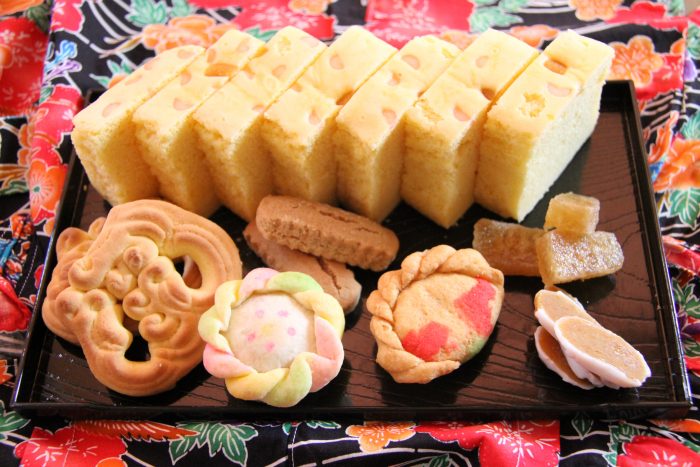 One of many influences from China, Ryukyu traditional pastries. 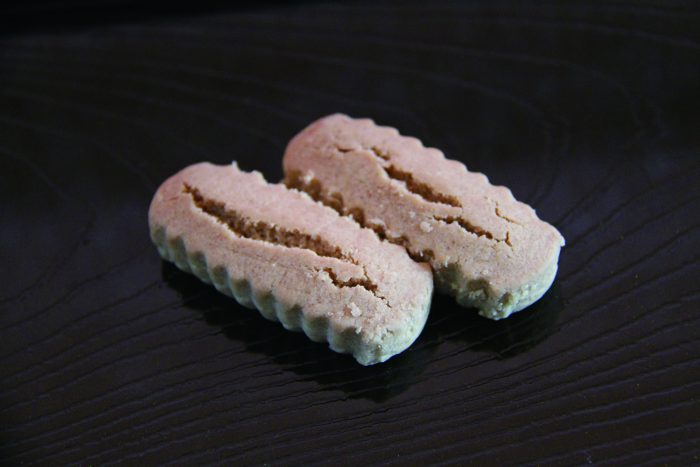 Chinsuko is very similar to a cookie in that it is made of flour and lard and has a crispy texture to it. Currently, it is a very popular Okinawa sweet that is found in any supermarket or convenience stores. In its basic form it is your typical white-sugar flavored pastry item, but they also come in many flavors like sweet potato flavor, salt flavor, coconut flavor, and coffee flavor. It is probably the most famous and popular of traditional Okinawan sweets. 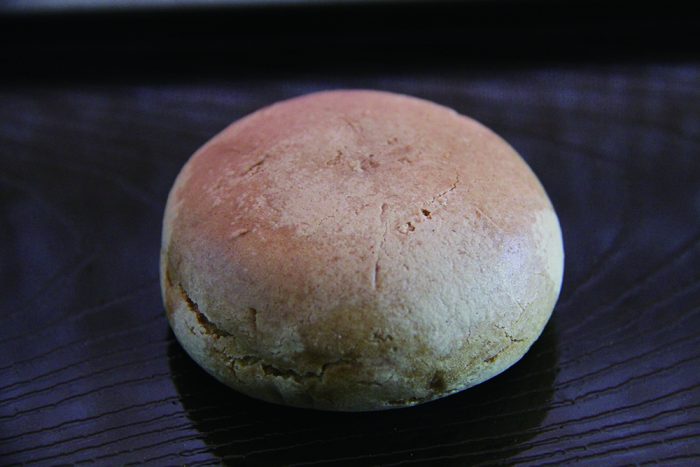 Kunpen is a traditional pastry with peanuts and sesame paste inside. It is a very popular sweet and is usually placed as an offering on the family alter, especially for a Buddhist memorial service. Kids will then take it from the alter and serve themselves. It too was popular during the days of the old Ryukyu Kingdom and is still a popular pastry item today. 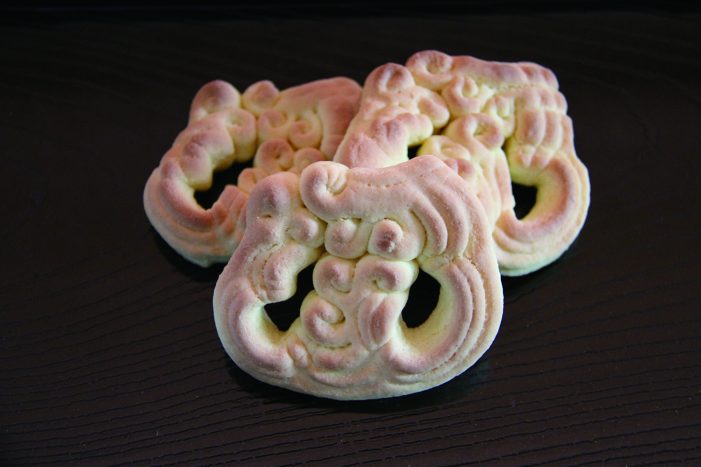 Hanabouru has its origins from Portugal. The ingredients are just flour, eggs, and sugar. Although a very simple type of pastry, its shape was what made it stood out and was much loved by the royal family. It had the look of a flower and was made by hand, much like it is today. Now you can taste a Hanabouru at the “Sasu-no-Ma” special room inside Shuri Castle. There is a limited number of Hanabouru available at any one time. They are made by “Arakaki Kami Kashi Ten” pastry shop which has a long history in the Shuri district area. Pastries can be purchased there as well. 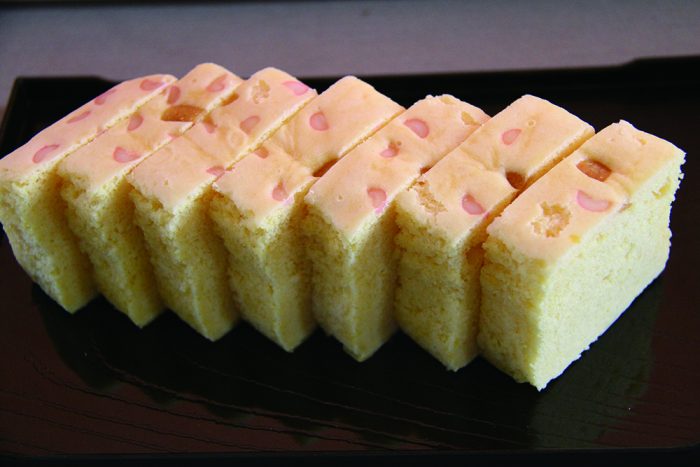 Chiirunko looks like a pound cake. It is made primarily from eggs. Beloved by the royal families during the Ryukyu Kingdom Era, red colored peanuts and Kippan were added as toppings to   accentuate the flavor. The Chiirunko’s shape looks very similar to that of the crown worn by the Ryukyu King and peanut and kippan toppings appear much like the crown’s gems. 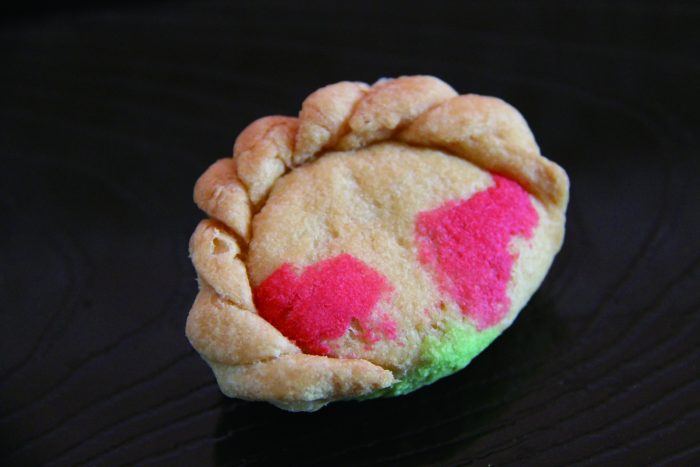 Tauchi-chao is a type of fried pastry. At first it is made into a dough consisting of peanuts and sesame paste inside, then covered by a skin that is composed of a flour and lard mix. Then it is fried. However, before it is fried, it is shaped into a semicircle and the edges are corrugated neatly to give it a decorative look. This corrugated shape looks similar to a chicken’s crest or its comb. The taste is great and has a nice scent to it. This pastry is often placed as a display item on the family alter at the 25th anniversary or 33rd anniversary of a relative’s death. 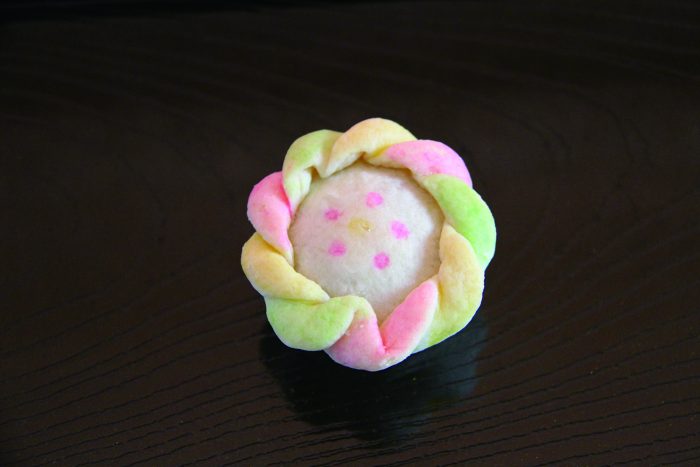 Senjyukou is a barrel shape pastry that is baked with a peanuts and sesame paste mixture inside. Like Tauchi-chao, it too is wrapped by a skin made of lard and flour. The unique feature of this pastry is that is often painted with bright colors like red, green, or yellow. The flower shape along with the bright look is meant to emulate a lotus flower. It is often used at various celebrations or Buddhist memorial services, especially it at the 33rd anniversary of relative’s death. 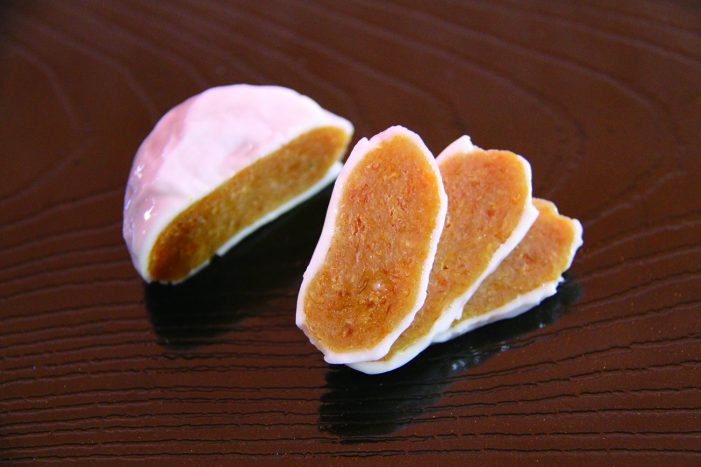 Kippan is a traditional sweet composed of a few kinds of citruses found here on Okinawa. Contrary to what you might be thinking, the pastry does not utilize the citrus juices. Instead, the outer layer is used, cooked along with sugar. The entire process takes about four days to finish. Once made only for the royal house, it eventually found its way into the local populace after the Meiji-era. It has a very citrus tangy taste to it. The Jahana Kippan Ten in Naha is the only shop where Kippan is made and sold. http://www.jahanakippan.com/en/ 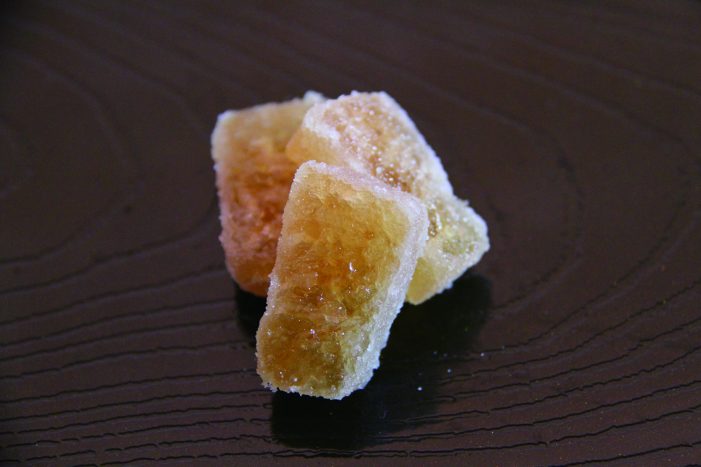 Tougantsuke is a traditional sweet made from “tougan”, which in Japanese means ‘winter melon’. It is made by simmering fresh tougan with sugar. Though it does take time and effort to make, the final product is very delicious and the taste is worth it. The pastry originally came from Fuzhou, China during the Ryukyu Kingdom era about 300 years ago. Because of its time-consuming process to make, it wasn’t accessible to the regular population until much later. Today, the Jahana Kippan Ten in Naha City is the only shop that serves Tougantsuke, and to this day, uphold the tradition of how it’s made. 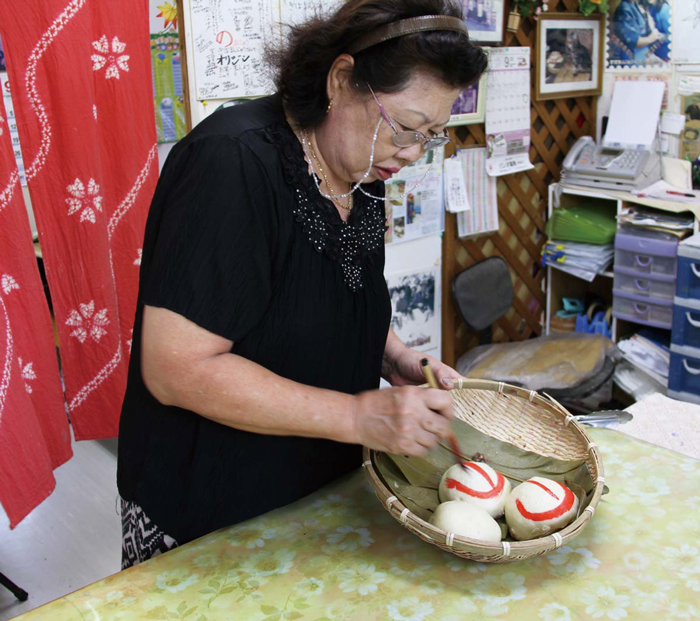 “Gibo Manjuu” the other name “Noh Munjuu” is a steamed pastry which filled with plenty of sweet bean paste. Its very unique sweets because the Japanese character “の” (no) will written on top of the pastry with red food coloring and thats why its called “Noh Manju” by local since long long time ago. Its said that “の” came from “Noshi” which is auspicious decoration for gifts dating from ancient times in Japan. 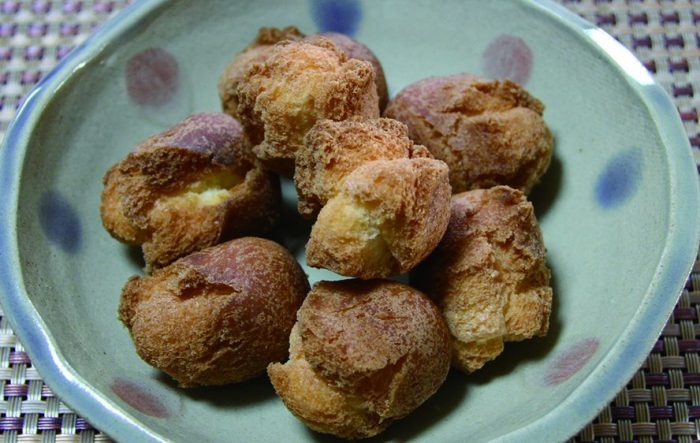 Saataa Andagii is very simple to make and very very popular sweets on    Okinawa. Ingredients and cooking direction are also very simple and easy, as the name of the sweet, “Saataa” means sugar and “Andagii” means fried food. Its a  necessary sweets at especially traditional cerebration on Okinawa, and there is a custom that a giant Saataa Andagii will be sent to bride’s family from a groom’s  family as a special gift in a customary  ceremony. 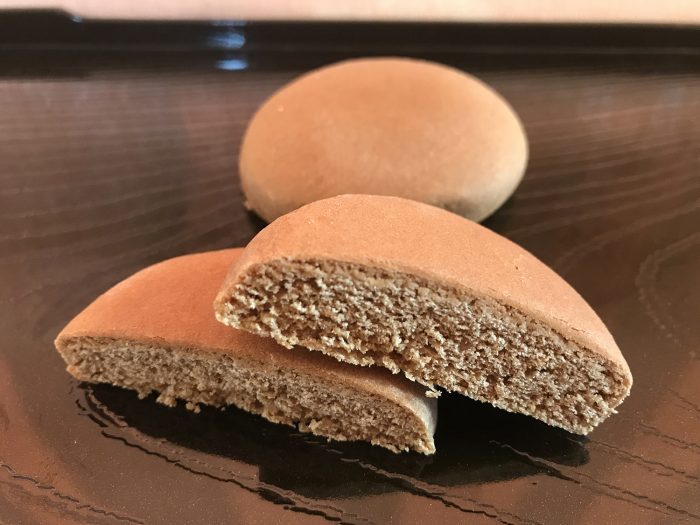 On the December 8th in lunar calendar, Okinawan make “Muuchi” which is traditional rice cake, its wrapped by a leaf of shell ginger and steamed. Families hung muuchiis on that day for praying kids health and success. Especially a family which have a newborn baby makes a lot of muuchii and give it to relative families and also offers it to Buddhist alters. 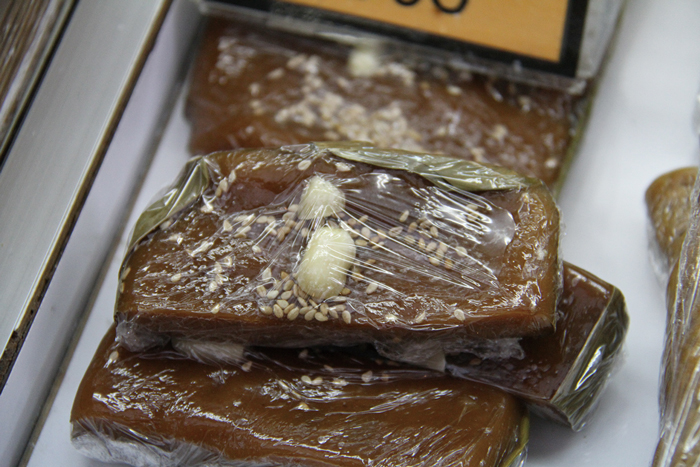 Nantuu is a kind of rice cake with blending brown sugar, red miso, peanuts and more, and placed on a leaf of shell ginger, and steamed. Its used to eat at New Year cerebration on Okinawa. Its said that the name come from “Nan” means “year” and “Tuu” means new. In current year, you can see it all the year at supermarkets and very popular traditional sweets. 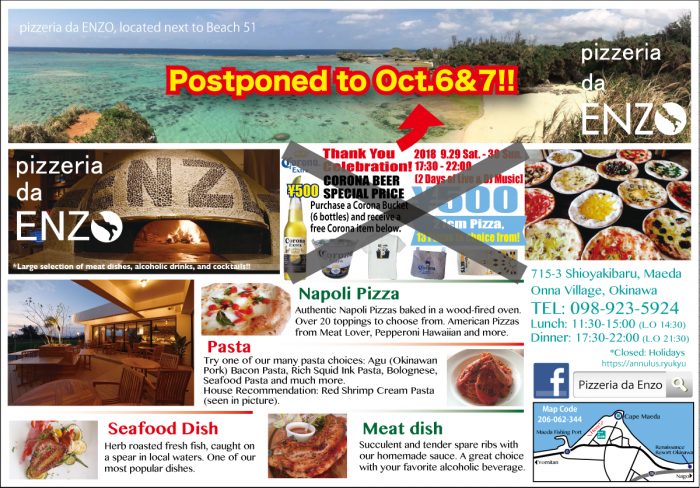