Sueyoshi Park A jungle in the heart of the city

Love nature? Love exploring? Want to feel like Indiana Jones in the opening scene of Raiders of the Lost Ark? Then Sueyoshi park is the place for you! In addition to flora and fauna in abundance, the park is also home to Sueyoshi temple, and the large family tomb of Prince Ginowan.

It’s important to take water, and mosquito repellent is also advisable. If you are sensitive to mosquito bites, then it’s best to wear long sleeves and long pants. Autumn and spring are the best seasons to visit.

Sueyoshi shrine is one of eight Ryukyu Hasssha. These shrines were built on the order of various Ryukyuan kings throughout the ages. Sueyoshi shrine was commissioned by King Sho Taikyu during the Kei-tai (景泰) period (1450-1456). In 1936, it was designated a National Monument, but it was subsequently destroyed in the Battle of Okinawa (Sueyoshi is known as “Wana Ridge” in U.S military literature). Sueyoshi shrine was rebuilt between 1969 and 1971, using historical photographs and documents to ensure the accuracy. (Word of caution: the 670 year-old steep cobble road leading up to the shrine is treacherously slippery when wet. Avoid on rainy days). 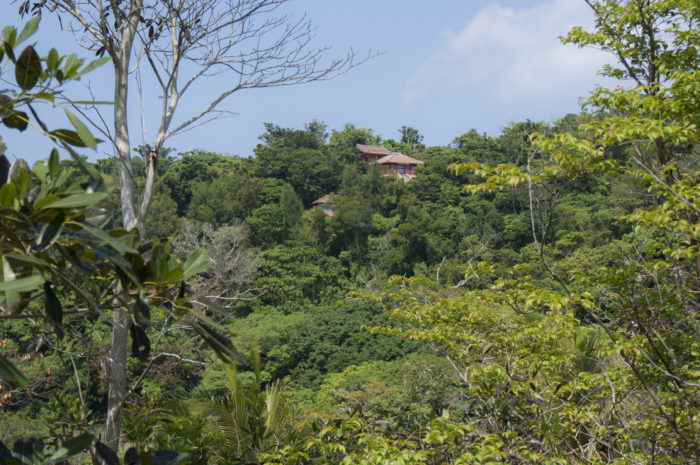 This huge tomb (12,000m²) is located to the west of the Shrine. It was built in the early 18th century for the prince and his family. Its design and construction technique is unique in Okinawa. On the path leading to the tomb, there is an information post (in English) that explains in detail the construction, and also how funeral ceremonies were performed. By the way, never point at Okinawan tombs. It’s considered taboo. The spirit of the dead will grab your finger! 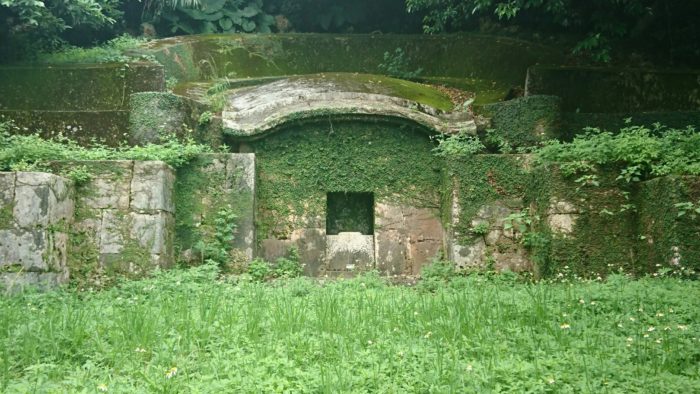 There are countless trails leading off the main paths that lead to prayer sites or, in some cases, dead ends! Just be adventurous. You will see a wide variety of native trees, ferns, and flowers. The majestic shu-ro trees (a type of palm) in the park are said to be a conduit between the spirit world and this world. The largest caves are difficult to find without a guide, but you can try this. Exit the shrine on the east side, follow the trail down to the main path, and turn left. Walk about 150 meters, and look carefully into the jungle on your right. If you are lucky, you may spot the entrance to one of the larger caves. Keep an eye open for snakes, though. (I have explored this park over 50 times, and have never encountered a snake. However, it pays to be careful!). 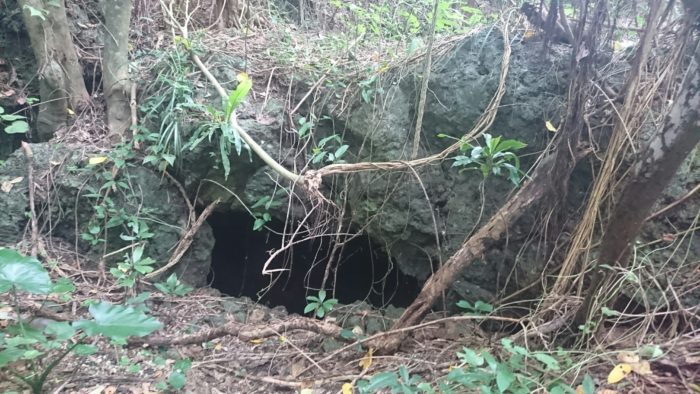 Drive along 330 (either direction) until you come to Furujima junction. Head up the hill for about 1km (route 82) toward Shuri, and you will see the entrance to the park on your left, just after Shiritsubyoyin Monorail Station. Ample free parking, but the gates are closed after sunset, so don’t get trapped!
So, quench your thirst for exploration and get a taste of the jungle this autumn in Naha city’s Sueyoshi Park.