Thousands of Eisa dancers representing about 70 Eisa groups from vatious parts of the island plus some 2,000 others who just want to join will parade along Kokusai Street in Naha in the annual 10000-dancer Eisa on August 4.

Rhythmic sounds of drums fill the air on Aug. 4th as thousands of dancers of all ages from some 70 groups will march along Kokusai Street in Naha in a seven-hour long procession. Along with the dancers, tens of thousands of spectators will fill the 1.6-kilometer-long street. 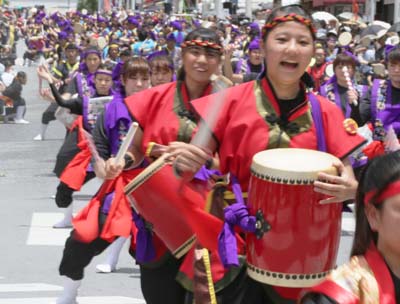 Every Eisa group has their own distinctive style and moves depending on the district they come from.

On the day of the event, Kokusai Street is closed for traffic from noon to 8:00 p.m. The parade is scheduled to begin at 1 p.m. In the case of an inclement weather, the even will be postponed to following Sunday, Aug. 11th.

During the parade, the dancers proceed down the Kokusai Street starting from Saion Square and ending at Palette Kumoji, stopping at some pre-designated stages along the way to show their stuff to the public. 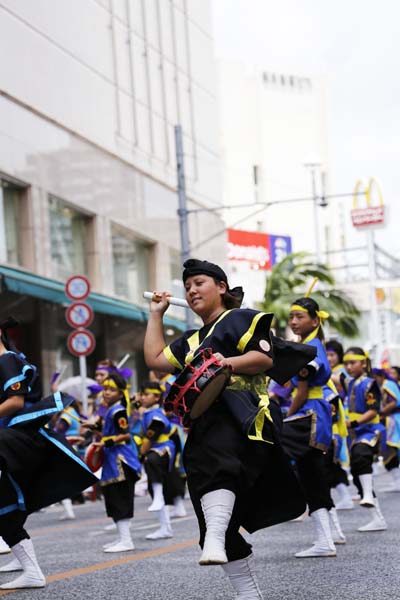 The parade proceed the whole length of the Kokusai Street starting from Saion Square and ending at Ryubo.

The 10,000 Eisa Festival has been organized since 1995. It is one of two major festivals taking place in downtown Naha each year. The second is the ‘Naha Tsunahiki,’ the giant tug-of-war, coming up in October.

Although the participants are amateurs, the Eisa groups certainly present a professional appearance and sound, the colorful uniforms and intense dance movements striking a chord echoing Okinawa’s historical past and present.

Traveling south on Highway 58 to Naha, turn left at any of the major intersections after passing the Tomari Port / Tomarin Hotel. Kokusai is about one-half kilometer away. Traffic will be heavy, and parking farther away from the Kokusai Street area itself is recommended. No free parking is available in the area, and fees for parking lots have to be paid in yen.