During summertime, marine activities ramp up around the island making it one of the most enjoyable activities here on Okinawa. However, that doesn’t mean it comes without its hazards. In fact, those dangers can appear unexpectedly at an instant and could lead to series injury, or even death. The 11th Regional Coast Guard Headquarters, who oversees statistical analysis for marine related accidents, cautions everyone when hitting the ocean.

An average of 93 marine activity related accidents on Okinawa were reported each year for the last 5 years. For each of those years, somewhere between 20 to 30 people unfortunately met their fate. As one might have guessed, much of those incidents occurred mostly during the summer from June to September. The 11th Regional Coast Guard also reports that about 50% of those incidents per year involved ocean recreational activities. Snorkeling ranked the highest at 27% followed by regular swimming (non-snorkeling) at 23%, and scuba diving at 18%. Playing on the rocks was 9% and fishing incidents at 8%. Smaller percentages included surfing, wakeboarding, etc.

As you can see, marine recreational accidents do not discriminate between ages. Everyone should take caution. So, it is important to understand the environmental conditions surrounding the ocean waters to help avoid being in a hazardous situation.

One of the most important dangers involving the ocean waters are ‘reef currents’, which is a particular type of rip current. As the name suggest these rip currents occur near the ocean reefs. Sometimes strong channeled currents of water gush through these reefs and flow away from the shore. The strong currents are caused by the constant flow of water being built up within gaps of inner coral reefs pushing out water in other areas generating strong currents in the outward direction. This is were people become trapped and taken further out to sea often leading to panic. It is at this moment that the possibility for drowning is at its highest. Even the best athletic swimmers cannot swim against the such force of nature. 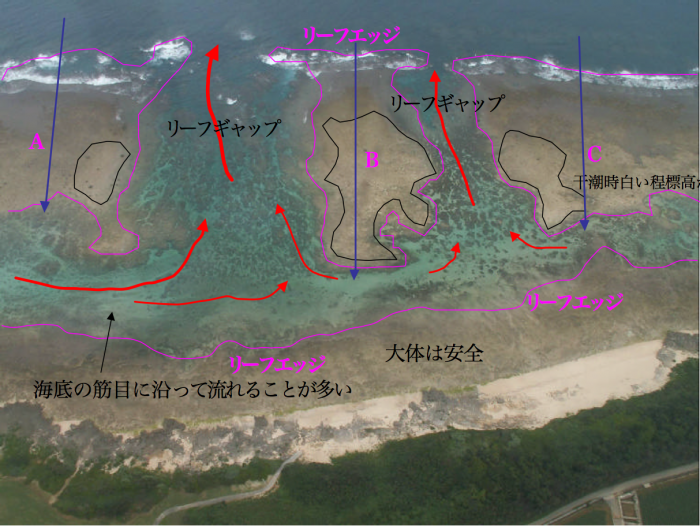 There are thousands of dangerous reef current spots around the island as well as in the remote outer islands. You can view these locations on the 11th Regional Coast Guard Headquarters official website http://www1.kaiho.mlit.go.jp/KAN11/reef/photo.htm    Of the past 5 years, about 10% of marine accidents are due to reef currents, sometimes leading to death. 62% of these cases involved snorkeling. People between the ages of 10 and 30 years old were the primary ages levels involved and 30% of those accidents involved foreigners. 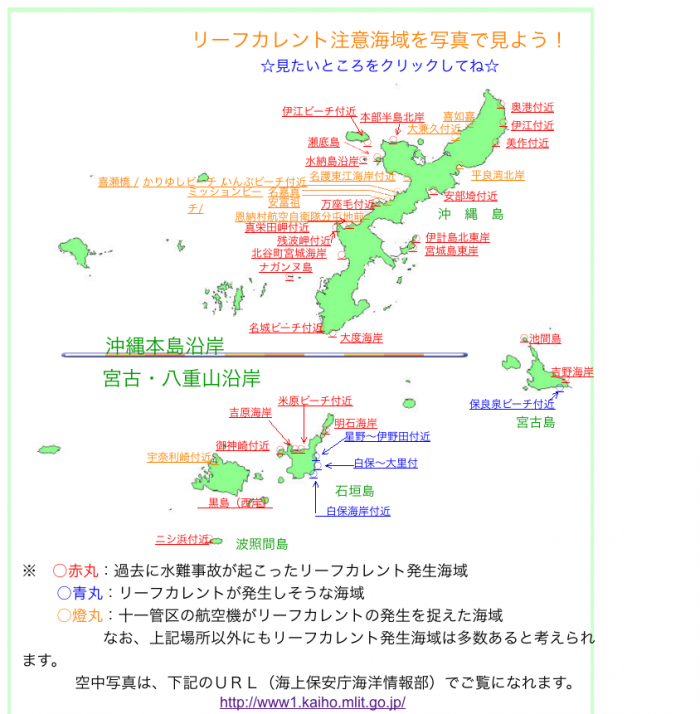 So what should you do if you get caught in one of these reef currents? According to the 11th Regional Coast Guard Headquarters, they say ① Don’t swim against the current. Escape with the current by swimming parallel to the shoreline across the current. Most reef currents are 10~30m in width. ② After you are out of the current, swim to the closest shore. ③ Most importantly, try to stay above the water and not to wrestle with the current under the ocean.

Of course, taking all precautions prior to hitting the water is important too. Know your location and do your best to research the area in advance. As always, go with a partner. Avoid prohibited areas, and if possible, swim in areas where lifeguards are on location. If the ocean seems rough due to high tides and strong winds, it is best to avoid it altogether. Be aware of the surrounding reefs and identify possible danger areas. Bring a flotation device or life jacket with you. If possible bring a mobile phone secured to your body in a waterproof case. If you feel you are in danger, the number to call for ocean related emergencies is 118.

The Coast Guard wants everyone to have an enjoyable summer and hopes you will have fond memories of your time here on the island. Please take all necessary precautions and use the tips above to keep you and your family members safe.